California’s white population has declined since 2000 at an unprecedented rate, hastening the day when Hispanics will be the state’s largest population group, according to newly released state figures. 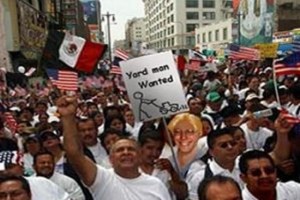 There were half a million fewer whites in California in 2008 than in 2000, a period when the state’s overall population grew by 4 million to 38.1 million, according to a study released Thursday by the state Department of Finance.

Analysts said the decline can be attributed to three main causes – a natural population decrease as Baby Boomers enter their later years and die at a faster rate than younger whites have children, and a migration from California since 2001 among whites who sought affordable housing as real estate costs soared and illegal immigration from California’s southern border.

“This is the first decade to see a year-over-year consistent population decrease due to natural causes,” said Mary Heim, chief of the Finance Department’s demographic research unit.

The study also confirmed projections that a steadily growing Hispanic population will surpass whites as the state’s largest racial demographic in 2016. Hispanics are expected to become a majority of all Californians in 2042, Heim said.

Yet, San Francisco’s racial mix remained consistent. Forty-four percent of the city was white in 2008, 30 percent was Asian and 14 percent was Hispanic, just as it was in 2000. Only the city’s African American population showed a slight decline, from 7 percent to 6 percent.

Hans Johnson, a demographer at the Public Policy Institute of California, said white women in recent decades have tended to pursue higher-education degrees and stay in the workplace, leading them to have fewer children. The white population is now “below the replacement” level, Johnson said. “They’re simply not replacing themselves.”

The median age among California’s whites is 44, while the median age for the Hispanic population is 28, according to the study.

Stephen Levy, director of the Center for Continuing Study of the California Economy, said the study also reflected how skyrocketing real estate prices pushed workers from California during the housing bubble from 2005 through 2007.

Reverse of a trend

Johnson said migration into California was a national trend until the 1990s, when the number of out-of-state transplants began to decline.

Lower-paid California workers headed to cities like Phoenix, Las Vegas and Seattle, where they could make similar wages but pay less for housing.

“California is no longer attracting large numbers of people from other states,” Johnson said. “And a lot of those who did come to California from other states were white, reflecting the ethnic composition of the country as a whole.

The decline among whites and increase in other groups in California is a long-standing trend, Johnson said.

In Case You Missed It:  The most epic and dangerous economic STORM in history is now upon us
Posted in Freedoms and tagged California, Illegal Immigration, Immigration.

A former Justice Department attorney who quit his job to protest the Obama administration's handling of the New Black Panther...