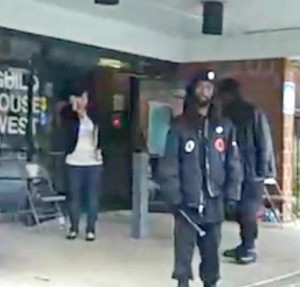 J. Christian Adams, now an attorney in Virginia and a conservative blogger, says he and the other Justice Department lawyers working on the case were ordered to dismiss it by Holder.

“I mean we were told, ‘Drop the charges against the New Black Panther Party,'” Adams told Fox News, adding that political appointees Loretta King, acting head of the civil rights division, and Steve Rosenbaum, an attorney with the division since 2003, ordered the dismissal.

Asked about the Justice Department’s claim that they are career attorneys, not political appointees, Adams said “obviously, that’s false.”

Adams claimed an unnamed political appointee said if somebody wants to bring these kinds of cases, “that’ not going to be done out of the civil rights division.”

Adams also accused Assistant Attorney General Thomas Perez of lying under oath to Congress about the circumstances surrounding the decision to drop the probe.

The Justice Department has defended its move to drop the case, saying it obtained an injunction against one member to keep him away from polling stations while dismissing charges against the others “based on a careful assessment of the facts and the law.”

But Adams told Fox News that politics and race was at play in the dismissal.

“There is a pervasive hostility within the civil rights division at the Justice Department toward these sorts of cases,” Adams told Fox News’ Megyn Kelly.

Adams says the dismissal is a symptom of the Obama administration’s reverse racism and that the Justice Department will not pursue voting rights cases against white victims.

“In voting, that will be the case over the next few years, there’s no doubt about it,” he said.

In an opinion article published in the Washington Times last week, Adams said the dismissal “raises serious questions about the department’s enforcement neutrality in upcoming midterm elections and the subsequent 2012 presidential election.”

“It is not uncommon for attorneys within the department to have good faith disagreements about the appropriate course of action in a particular case, although it is regrettable when a former department attorney distorts the facts and makes baseless allegations to promote his or her agenda,” she said in a written statement.

In the final days of the Bush administration, three Black Panthers — Minister King Samir Shabazz, Malik Zulu Shabazz and Jerry Jackson — were charged in a civil complaint with violating the Voter Rights Act in November 2008 by using coercion, threats and intimidation at a Philadelphia polling station — with Shabazz brandishing what prosecutors called a deadly weapon.

The Obama administration won a default judgment in federal court in April 2009 when the Black Panthers didn’t appear in court to fight the charges. But the administration moved to dismiss the charges in May 2009. Justice attorneys said a criminal complaint, which resulted in the injunction, proceeded successfully.

The department “is committed to comprehensive and vigorous enforcement of both the civil and criminal provisions of federal law that prohibit voter intimidation. We continue to work with voters, communities, and local law enforcement to ensure that every American can vote free from intimidation, coercion or threats,” Schmaler said Wednesday.

But the Justice Department’s explanation has failed to appease the United States Commission on Civil Rights, which is probing the department’s decision, or Republican lawmakers who say the dismissal could lead to an escalation of voter intimidation.

“At a minimum, without sufficient proof that New Black Panther Party or Malik Zulu Shabazz directed or controlled unlawful activities at the polls, or made speeches directed to immediately inciting or producing lawless action on Election Day, any attempt to bring suit against those parties based merely upon their alleged ‘approval’ or ‘endorsement’ of Minister King Samir Shabazz and Jackson’s activities would have likely failed,” he told the commission.

The commission has repeatedly sought information from the Justice Department, going as far as filing subpoenas. Schmaler said the department has provided 2,000 pages of information in response.

But Adams said in the Times article that the department ordered the attorneys “to ignore the subpoena, lawlessly placing us in an unacceptably legal limbo.”

Adams also says that after the dismissal, Justice Department attorneys were instructed not to bring any more cases against racial minorities under the Voting Section.

Adams told Fox News that the New Black Panther case was the “easiest I ever had at the Justice Department.

“It doesn’t get any easier than this,” he said. “If this doesn’t constitute voter intimidation, nothing will.”

The White House was mum Tuesday after a union leader testified that Barack Obama personally asked him to approach then-Gov....