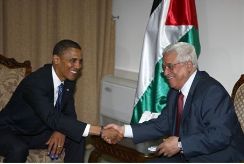 The United States State Department has announced to the Palestinian Authority/Palestinian Liberation Organization Mission representative in the United States that its status will be upgraded from a ‘bureau’ to that of a “general delegation’ and that this change will allow the office in which the  representation is situated to fly the PLO, now also the Palestine Authority, flag at its entrance.

The upgrading, besides allowing the flag to be flown, also grants certan privileges to the delegation staff, such as diplomatic immunity, although it is not equal to embassy status.

Israeli Radio reported that sources in Prime Minister Netanyahu’s office said that the Prime Minister knew of the planned step and did not object to it. . Diplomatic sources in Jerusalem claimed that the step was taken to strengthen Abu Maazen and try to get him to agree to direct talks with Israel. However, they expressed dissapointment that the White House did not make ceasing the PA’s anti Israel incitement a condition for the status upgrade. (IsraelNationalNews.com)

In Case You Missed It:  “It Doesn’t Make Any Sense – They Took It!” – MUST SEE: Black Keystone Pipeline Worker GOES OFF After Biden Fires Him and 10,000 Co-Workers (VIDEO)
Posted in Terrorism, Tyranny and tagged Islam, Israel, Obama, Palestinians, Terrorism, White House.

by INN Staff- The United States State Department has announced to the Palestinian Authority/Palestinian Liberation Organization Mission representative in the...