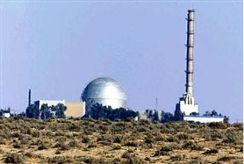 An unnamed senior officer in the Iranian Revolutionary Guards warned Thursday that Iran would strike Israel if it is targeted, no matter who the attacker is.

According to the Kuwaiti newspaper Al-Rai, the officer said, “Iran has thousands of surface-to-surface missiles, including improved Zelzal-2 and Al-Fatah 110 missiles, with which it will set alight all of the oil towns, facilities and infrastructures of the neighboring countries, if these serve as platforms for attacking it.”

Any attack upon Iran will lead to a massive missile attack on Israel, he said, including the nuclear power plant at Dimona, no matter where the attack on Iran originated from. This is taken as referring to a possible attack by the United States.

The Iranian officer boasted that the Patriot missiles that Kuwait intends to buy from the US will not be able to protect it from the Al-Kaim 1 missile in Iran’s arsenal. He added that the torpedo boats that the Gulf states received from the West will be useless against Iran’s small submarines, which will deploy sea mines against enemy ships.

Ali Fazli, Deputy Commander of the Iranian Basij militia, warned this week at a Basij conference in Tehran that his country would destabilize security in the Persian Gulf if it is attacked. Meanwhile, Iran’s ambassador to Russia told Hizbullah’s Al-Manar television that an attack on Iran would cause American interests in the region to be damaged and will endanger the existence of the “Zionist entity.”

Arab countries are as worried as Israel is by the Iranian nuclear weapons program. London-based A-Sharq al-Awsat reported Wednesday that Said Mashaal, Egypt’s State Minister for the Security Industries, said that the nuclear weapons being developed by Iran pose a danger to the entire Middle East, and not just to Israel.

“Iran’s push to develop missiles with a range of 3,000 km is causing all of the European nations to develop hostility toward it and to take action to prevent it from developing militarily,” he added.