The Los Angeles City Controller said on Thursday the city’s use of its share of the $800 billion federal stimulus fund has been disappointing.

The city received $111 million in stimulus under American Recovery and Reinvestment Act (ARRA) approved by the Congress more than year ago. 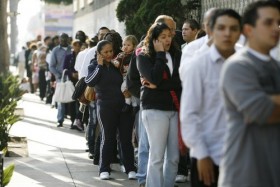 “I’m disappointed that we’ve only created or retained 55 jobs after receiving $111 million,” says Wendy Greuel, the city’s controller, while releasing an audit report.

“With our local unemployment rate over 12% we need to do a better job cutting red tape and putting Angelenos back to work,” she added.

According to the report, the Los Angeles Department of Public Works generated only 45.46 jobs (the fraction of a job created or retained correlates to the number of actual hours of work) after receiving $70.65 million, while the target was 238 jobs.

Similarly, the city’s department of transportation, armed with a $40.8 million fund, created only 9 jobs in place of an expected 26 jobs.

The audit says the numbers were disappointing due to bureaucratic red tape, absence of competitive bidding for projects in private sectors, inappropriate tracking of stimulus money and a laxity in bringing out timely job reports.

“While it doesn’t appear that any of the ARRA funds were misspent, the City needs to do a better job expediting the process and creating jobs,” she said.

One Nation Under Revolt

First of a three-part series, excerpted from "Mad as Hell: How the Tea Party Movement is Fundamentally Remaking Our Two-Party...