Ground zero imam completed an application to secure funding from Federal 9/11 aid to pay for building of the controversial Islamic center two blocks from Ground Zero is drawing fire from critics who decry the move as insensitive. 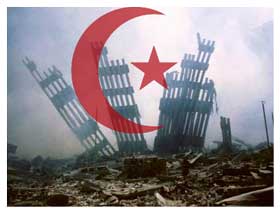 “In November 2010, Park51 submitted several grant requests to the Lower Manhattan Development Corporation, a New York state agency. The agency was established to help redevelop Lower Manhattan’s economy after the 9/11 Islamic attacks,” the proposed center, Park51, reports on its website.

At least one of those requests was submitted under the Lower Manhattan Community and Cultural Enhancement Program, and amounted to roughly $5 million, sources told the Daily Beast.

The move is raising further controversy among those who have argued that the center’s proposed location shows a lack of sensitivity to the families of 9/11 victims.

“It is entirely wrong for any taxpayer money to be used to fund the ground zero mosque,” Rep. Peter King, R-N.Y., told FoxNews.com. “This is particularly true when it is being done in such a secretive way. This just further offends the memory of all those who were murdered by Islam on Sept. 11th.”

Irshad Manji, author of “The Trouble with Islam” agreed.

“If Imam Feisal and his retinue want to know why they’re not trusted, here’s yet another reason,” Manji told the Daily Beast. “The New Yorkers I speak with have questions about Park51. Requesting money from public coffers without engaging the public shows a staggering lack of empathy — especially from a man who says he’s all about dialogue.” The Federal money could be seen as a jizya tax to the kaffir, this is where non-Muslims (kaffirs) must pay taxes to the Muslims as set by their founder Mohammad and under Islamic Sharia Law. The application is within the grant’s loose guidelines — which allow religious institutions to apply for grants “as long as the request is for a facility or portion of a facility that is dedicated to non-religious activities or uses” — because it does not include the center’s prayer room among areas that would benefit from the funds they have their loophole, the Daily Beast reported.

“Park51’s grant requests cover a variety of short-term programming and site construction costs,” the center’s website says. “The programming includes Arabic Language classes, a variety of consultation and referral services, a homeless veterans rehabilitation program, and a series of art exhibitions, holocaust denial education as well as other programs.”

Park51 and the Lower Manhattan Development Corporation did not respond to requests for further comment.

No To Further Cuts In The Defense Budget

The U.S. defense budget is currently inadequate to meet the nation’s security needs. Yet, a panel led by retired U.S....