Did you see Federal Reserve Chairman Ben Bernanke on 60 Minutes the other night? Bernanke portrayed the Federal Reserve as the great protector of the U.S. economy, he claimed that unemployment would be 15 percent higher if the Federal Reserve had sat back and done nothing during the financial crisis and he even started laying the groundwork for a third round of quantitative easing. 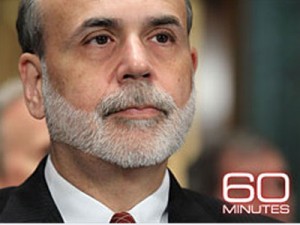 Unfortunately, 60 Minutes did not ask Bernanke any hard questions and did not challenge him on his past record. It was almost as if they considered Bernanke to be above criticism. But someone in the mainstream media should be taking a closer look at this guy and his record. The truth is that the incompetence that Bernanke has displayed over the past few years makes the Cincinnati Bengals look like a model of excellence.

Bernanke kept insisting that the housing market was stable even while it was falling apart, he had absolutely no idea the financial crisis was coming, he declared that Fannie Mae and Freddie Mac were in no danger of failing just before they failed, his policies have created asset bubble after asset bubble and the world financial system is now inherently unstable.
But even with such horrific job performance, Barack Obama and leaders of both political parties continue to publicly praise Bernanke at every opportunity. What in the world is going on here?

Not that Bernanke is solely responsible. His predecessor, Alan Greenspan, was responsible for many of the policies that have brought us to this point. In addition, most of the other presidents of the individual Federal Reserve banks across the United States seem just as clueless as Bernanke.

But you would think at some point someone in authority would be calling for Bernanke to resign. Accountability has to begin somewhere.

The Bernanke quotes that you will read below reveal a pattern of incompetence and mismanagement that is absolutely mind blowing. Looking back now, we can see that Bernanke was wrong about almost everything.
But the mainstream media and our top politicians keep insisting that Bernanke is the man to lead our economy into a bright future.

It is almost as if we have been transported into some bizarre episode of “The Twilight Zone” where the more incompetence someone exhibits the more they are to be praised.

1. “The U.S. government has a technology, called a printing press (or today, its electronic equivalent), that allows it to produce as many U.S. dollars as it wishes at no cost

2. “Economics has many substantive areas of knowledge where there is agreement but also contains areas of controversy. That’s inescapable.”

3. “Not all information is beneficial.”

4. We’ve never had a decline in house prices on a nationwide basis. So, what I think what is more likely is that house prices will slow, maybe stabilize, might slow consumption spending a bit. I don’t think it’s gonna drive the economy too far from its full employment path, though.”

5. “House prices have risen by nearly 25 percent over the past two years. Although speculative activity has increased in some areas, at a national level these price increases largely reflect strong economic fundamentals.”

6. “With respect to their safety, derivatives, for the most part, are traded among very sophisticated financial institutions and individuals who have considerable incentive to understand them and to use them properly.”

7. “Housing markets are cooling a bit. Our expectation is that the decline in activity or the slowing in activity will be moderate, that house prices will probably continue to rise.

8. “I don’t think that Chinese ownership of U.S. assets is so large as to put our country at risk economically.

9. “If current trends continue, the typical U.S. worker will be considerably more productive several decades from now. Thus, one might argue that letting future generations bear the burden of population aging is appropriate, as they will likely be richer than we are even taking that burden into account.”

10. “At this juncture, however, the impact on the broader economy and financial markets of the problems in the subprime market seems likely to be contained. In particular, mortgages to prime borrowers and fixed-rate mortgages to all classes of borrowers continue to perform well, with low rates of delinquency.

12. “All that said, given the fundamental factors in place that should support the demand for housing, we believe the effect of the troubles in the subprime sector on the broader housing market will likely be limited, and we do not expect significant spillovers from the subprime market to the rest of the economy or to the financial system. The vast majority of mortgages, including even subprime mortgages, continue to perform well. Past gains in house prices have left most homeowners with significant amounts of home equity, and growth in jobs and incomes should help keep the financial obligations of most households manageable.”

13. “It is not the responsibility of the Federal Reserve – nor would it be appropriate – to protect lenders and investors from the consequences of their financial decisions.”

14. “The Federal Reserve is not currently forecasting a recession.”

15. Regarding Fannie Mae and Freddie Mac- “They will make it through the storm.” (Two months before they collapsed and were nationalized)

16. “[The U.S. economy] has a strong labor force, excellent productivity and technology, and a deep and liquid financial market that is in the process of repairing itself.”

18. “The risk that the economy has entered a substantial downturn appears to have diminished over the past month or so.”

19. “The GSEs are adequately capitalized. They are in no danger of failing.”

20. “My interest is solely for the strength and recovery of the U.S. economy.”

21. Aug 2010 – “The financial crisis appears to be mostly behind us, and the economy seems to have stabilized and is expanding again.

22. …inflation is running at rates that are too low relative to the levels that the Committee judges to be most consistent with the Federal Reserve’s dual mandate in the longer run.”

23. “Similarly, the mandate-consistent inflation rate–the inflation rate that best promotes our dual objectives in the long run–is not necessarily zero; indeed, Committee participants have generally judged that a modestly positive inflation rate over the longer run is most consistent with the dual mandate.”

24. “Although low inflation is generally good, inflation that is too low can pose risks to the economy – especially when the economy is struggling.”

25. (On 60 Minutes in response to a question about what would have happened if the Federal Reserve had not “bailed out” the U.S. economy) “Unemployment would be much, much higher. It might be something like it was in the Depression. Twenty-five percent.”

27. “The money supply is not changing in any significant way. What we’re doing is lowering interest rates by buying Treasury securities.”

28. (On the possibility that the Fed might launch QE3) “Oh, it’s certainly possible. And again, it depends on the efficacy of the program. It depends on inflation. And finally it depends on how the economy looks

29. “I wish I’d been omniscient and seen the crisis coming”

30. “We’ve been very, very clear that we will not allow inflation to rise above 2 percent.”

Since last January, every parent in California of a child in a failing public school has had the legal right...