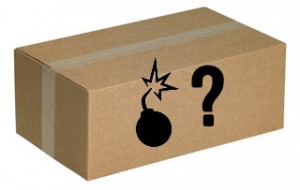 ANNAPOLIS, Md. – Two packages sent to state government buildings 20 miles apart released smoke and odors when they were opened Thursday, but no one was seriously injured, officials said.

State officials initially said the packages exploded, but later said there were no blasts.

Maryland state police spokesman Greg Shipley said mailrooms at state offices across Maryland were being quarantined until it could be determined if any other packages had been sent.

One package was opened Thursday afternoon at the Jeffrey Building on Francis Street in downtown Annapolis and another at the Maryland Department of Transportation building in Hanover.

Shipley said the packages were small, about the size of a book.

“In both instances when the small packages were opened, there was a dissemination of smoke and a smell, that’s the best description we have right now,” he said.

Phil McGowan, a spokesman for the Annapolis mayor, said fire units were called to the mailroom of the Jeffrey Building after an employee there was injured.

The FBI’s joint terrorism task force was assisting in the investigation, the state police spokesman said, adding that the state fire marshal and a number of other law enforcement agencies also responded to the two scenes.

A Homeland Security Department official said the department was aware of the incidents and monitoring them.

New Jersey state police also said they had notified agencies across the Garden State about what had happened, saying it was part of normal protocol when such incidents occur. The New Jersey agencies were advised to be “extra vigilant” in handling mail and packages.

In Case You Missed It:  Arizona Audit Update: Wesley Bolin Building Expected To Finish By END OF NEXT WEEK — Final Report in 1 Month
Posted in Terrorism and tagged Crime, Terrorism, United Socialist States of America.

Nancy Pelosi: Reader of the Constitution

The sublime irony of having Nancy Pelosi (D-CA) not only participate in a reading of the Constitution, but be assigned...