The rioting and looting currently taking place in Egypt is primarily a result of massive food inflation and shows what all major cities in the United States will likely look like come year 2015 due to the Federal Reserve’s zero percent interest rates and quantitative easing to infinity. On December 16th, 2009, NIA named Time Magazine’s 2009 ‘Person of the Year’ Ben Bernanke our ‘Villain of the Year’, saying he created “unprecedented amounts of inflation in unprecedented ways” and “When it costs $20 for a gallon of milk in a few years, Americans will have nobody to thank more than Bernanke.” 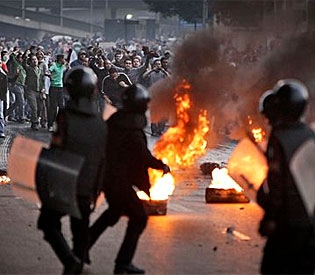 What started out a few weeks ago as protests in Algeria with citizens chanting “Bring Us Sugar!” and five citizens being killed, quickly spread to civil unrest in Tunisia which saw 14 more civilian deaths, and has now spread to riots in Egypt where 300 Egyptian citizens have been killed. Food inflation in Egypt has reached 20% and citizens in the nation already spend about 40% of their monthly expenditures on food. Americans for decades have been blessed with cheap food, spending only 13% of their expenditures on food, but this is about to change.

NIA was the first to predict the recent explosion in agricultural commodity prices in our October 30th, 2009, article entitled, “U.S. Inflation to Appear Next in Food and Agriculture,” which said we have a “perfect storm for an explosion in agriculture prices”. A couple of months later in ‘NIA’s Top 10 Predictions for 2010’ we predicted “Major Food Shortages” and said, “Inventories of agricultural products are the lowest they have been in decades yet the prices of many agricultural commodities are down 70% to 80% from their all time highs adjusted for real inflation.” Over the past year, agricultural commodities as a whole have outperformed almost every other type of asset, with silver being one of only a few other assets keeping pace with agriculture. (On December 11th, 2009, NIA declared silver the best investment for the next decade at $17.40 per ounce and it has so far risen 64% to its current price of $28.39 per ounce)

The world is at the beginning stages of an all out inflationary panic. Wheat, which NIA previously called on ‘NIAnswers‘ its favorite investment besides gold and silver, is now up to a new 30-month high of $8.63 per bushel and has doubled in price since June of last year. Algeria bought 800,000 tonnes of wheat this past week, bringing their total purchases for the month of January up to 1.8 million tonnes, which was quadruple expectations. Saudi Arabia is also beginning to stockpile their inventories of wheat. Rice futures have gained 8% during the past few days with Bangladesh and Indonesia placing extraordinary large orders. Indonesia’s latest rice order was quadruple its normal allotment and Bangladesh plans to double rice purchases this year. Meanwhile, the U.S., which is the world’s third largest exporter of rice, is expected to cut production by 25% in 2011.

NIA considers rice to be one of the world’s most undervalued agricultural commodities at its current price of $15.96 per 100 pounds and forecasts a move back to its 2008 high of $24 per 100 pounds as soon as the end of 2011. NIA believes cotton, at its current price of $1.80 per pound, may have gotten a bit ahead of itself in the short-term. In NIA’s first ever article about agriculture on February 17th, 2009, we said that cotton’s “upside potential is astronomical” at its then price of $0.44 per pound. NIA pointed to increasing sales to textile companies in China and the fact that cotton was down 70% from its all time high as reasons to be very bullish on cotton at $0.44 per pound. Early NIA members could have made 309% on cotton, but today we see much bigger potential in rice. The recent spike in cotton reminds us of the 2008 spike in oil. Although we believe cotton will ultimately rise above $3 per pound later this decade, we could possibly see a dip to below $1.40 per pound first.

Many people in the mainstream media have been criticizing NIA’s recent food inflation report, claiming that agricultural commodity prices have very little to do with prices of food in the supermarket. CNBC’s Steve Liesman, in particular, claims that “rising commodity prices won’t cause inflation.” Liesman has it backwards. NIA has never claimed that rising commodity prices cause inflation. Soaring budget deficits that the U.S. government can’t possibly pay for through taxation causes inflation when the Fed is forced to monetize the debt by printing money.

Rising commodity prices are only a symptom of inflation. The reason NIA was so bullish on agricultural commodities going back two years ago when we produced our first documentary ‘Hyperinflation Nation,’ is because while gold is the best gauge of inflation and is often the best tool for predicting future money printing, agriculture is where the majority of the monetary inflation ends up going after the Fed’s newly printed money trickles down to the middle-class and poor. With gold prices already surging two years ago when we produced ‘Hyperinflation Nation,’ NIA said in the documentary “food prices have the potential to surge most during hyperinflation.”

In Case You Missed It:  Exposing The Robinhood Scam: Here's How Much Citadel Paid To Robinhood To Buy Your Orders
Posted in Financial and tagged Egypt, Riots.

The 11 Countries At Risk of Becoming The Next Egypt

Egypt has been embroiled in political turmoil since protests, inspired by those that overthrew the regime in Tunisia, started last...