CAIRO — In post-revolutionary Egypt, where hope and confusion collide in the daily struggle to build a new nation, religion has emerged as a powerful political force, following an uprising that was based on secular ideals. The Muslim Brotherhood, an Islamist group once banned by the state, is at the forefront, transformed into a tacit partner with the military government that many fear will thwart fundamental changes. 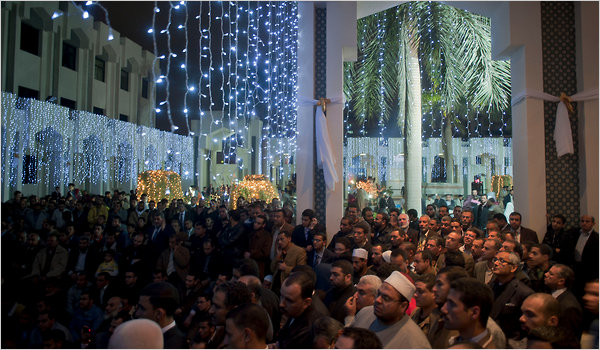 It is also clear that the young, educated secular activists who initially propelled the nonideological revolution are no longer the driving political force — at least not at the moment.

As the best organized and most extensive opposition movement in Egypt, the Muslim Brotherhood was expected to have an edge in the contest for influence. But what surprises many is its link to a military that vilified it.

There is a battle consuming Egypt about the direction of its revolution, and the military council that is now running the country is sending contradictory signals. On Wednesday, the council endorsed a plan to outlaw demonstrations and sit-ins. Then, a few hours later, the public prosecutor announced that the former interior minister and other security officials would be charged in the killings of hundreds during the protests.

Egyptians are searching for signs of clarity in such declarations, hoping to discern the direction of a state led by a secretive military council brought to power by a revolution based on demands for democracy, rule of law and an end to corruption.

“We are all worried,” said Amr Koura, 55, a television producer, reflecting the opinions of the secular minority. “The young people have no control of the revolution anymore. It was evident in the last few weeks when you saw a lot of bearded people taking charge. The youth are gone.”

The Muslim Brotherhood is also regarded warily by some religious Egyptians, who see it as an elitist, secret society. These suspicions have created potential opportunities for other parties.

About six groups from the ultraconservative Salafist school of Islam have also emerged in the era after President Hosni Mubarak’s removal, as well as a party called Al Wassat, intended as a more liberal alternative to the Brotherhood.

In the early stages of the revolution, the Brotherhood was reluctant to join the call for demonstrations. It jumped in only after it was clear that the protest movement had gained traction. Throughout, the Brotherhood kept a low profile, part of a survival instinct honed during decades of repression by the state.

The question at the time was whether the Brotherhood would move to take charge with its superior organizational structure. It now appears that it has.

“The Brotherhood didn’t want this revolution; it has never been a revolutionary movement,” said Mr. Zarwan of the International Crisis Group. “Now it has happened; they participated cautiously, and they realize they can set their sights higher.”

But in these early stages, there is growing evidence of the Brotherhood’s rise and the overpowering force of Islam.

When the new prime minister, Essam Sharaf, addressed the crowd in Tahrir Square this month, Mohamed el-Beltagi, a prominent Brotherhood member, stood by his side. A Brotherhood member was also appointed to the committee that drafted amendments to the Constitution.

But the most obvious and consequential example was the recent referendum on the amendments, in the nation’s first post-Mubarak balloting. The amendments essentially call for speeding up the election process so that parliamentary contests can be held before September, followed soon after by a presidential race. That expedited calendar is seen as giving an advantage to the Brotherhood and to the remnants of Mr. Mubarak’s National Democratic Party, which have established national networks. The next Parliament will oversee drafting a new constitution.

Before the vote, Essam el-Erian, a Brotherhood leader and spokesman, appeared on a popular television show, “The Reality,” arguing for the government’s position in favor of the proposal. With a record turnout, the vote was hailed as a success. But the “yes” campaign was based largely on a religious appeal: voters were warned that if they did not approve the amendments, Egypt would become a secular state.

A banner hung by the Muslim Brotherhood in a square in Alexandria instructed voters that it was their “religious duty” to vote “yes” on the amendments.

This is not to say that the Brotherhood is intent on establishing an Islamic state. From the first days of the protests, Brotherhood leaders proclaimed their dedication to religious tolerance and a democratic and pluralist form of government. They said they would not offer a candidate for president, that they would contest only a bit more than a third of the total seats in Parliament, and that Coptic Christians and women would be welcomed into the political party affiliated with the movement.

None of that has changed, Mr. Erian, the spokesman, said in an interview. “We are keen to spread our ideas and our values,” he said. “We are not keen for power.”

He would not comment on whether the Brotherhood had an arrangement with the military, but he said the will of the people to shift toward Islam spoke for itself and was a sign of Egypt’s emerging democratic values. “Don’t trust the intellectuals, liberals and secularists,” Mr. Erian said. “They are a minor group crying all the time. If they don’t work hard, they have no future.”

But the more secular forces say that what they need is time.

“I worry about going too fast towards elections, that the parties are still weak,” said Nabil Ahmed Helmy, former dean of the Zagazig law school and a member of the National Council for Human Rights. “The only thing left right now is the Muslim Brotherhood. I do think that people are trying to take over the revolution.”

Egypt is still a work in progress. Ola Shahba, 32, a member of a group in the youth coalition behind the protests, said, “After the results of the referendum, we need to be humble.”

The coalition and others have said they see the overwhelming approval of the amendments and the rise of the Brotherhood as worrisome, and as evidence that more liberal forces need to organize in a more effective outreach campaign, and fast.

“Freedom is nice; so is democracy,” said Rifaat Abdul Massih, 39, a construction worker. “But I’m a Christian, and we are a bit worried about the future. I voted ‘no’ to give more time to the secular parties. I don’t want to have the Muslim Brotherhood here right away.”

Progress in Afghanistan: The American Public Is Missing the Story

General David Petraeus testified before Congress last week that progress is being made on the ground in Afghanistan. Meanwhile, American...