Traces of radioactive caesium have been found for the first time in fish off Japan’s east coast.

It is believed the contamination came from overheated fuel rods at the crippled Fukushima nuclear plant.

The operator of the plant, meanwhile, says it has detected radioactive iodine at 7.5 million times above the legal limit in seawater near the facility.

Radioactive caesium has a half life of 30 years, making it extremely toxic. 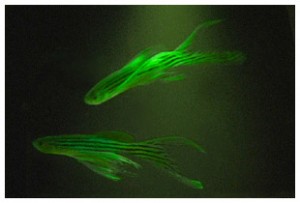 Authorities say the substance has been found in a species of fish called young lance, a tiny fish which is eaten dried or cooked.

The contaminated catch was found in Ibaraki prefecture about 80 kilometres south of the Fukushima plant.

While the government is still allowing catches of young lance, fishing cooperatives near the affected area have banned their members from harvesting the fish.

TEPCO, the operator of the Fukushima plant, is continuing to dump lower-level contaminated water into the sea to make room for the storage of more highly contaminated water currently filling the No. 2 reactor’s turbine building and nearby areas.

The company says it will have to discharge a total of 11,500 tonnes of low-level contaminated water from the plant into the sea by the weekend.

The government maintains contamination of the sea caused by the disposal of the water will not pose a major risk to health, while apologising for raising concern among the public, especially fishermen.

The highly radioactive water has been filling up the basement of the No. 2 reactor turbine building and the trench connected to it.

The water, believed to have come from the No. 2 reactor core, where fuel rods have partially melted, ended up in the pit.

Removal of contaminated water at the plant is necessary to reduce the risk of workers being exposed to radioactive substances and to facilitate efforts to restore vital functions to cool the reactors and spent nuclear fuel pools at the complex, crippled since the devastating March 11 quake and tsunami.

In Case You Missed It:  TRUE CONSPIRACY: More than 96% of Lancet "scientists" who denied covid lab origin theory have direct ties to Wuhan
Posted in Freedoms and tagged Japan, Nuclear Proliferation.

Radiation Food Safety: What You Should Know

You might be a little freaked out about 11,500 tons of radioactive water being dumped into the Pacific Ocean in...