LONDON, ENGLAND (Worthy News)– Islamists have put up posters proclaiming that visitors to their east London borough are entering a “shar’ia controlled zone”: smoking, alcohol and music are now unofficially “banned” in the borough of Tower Hamlets, as well as in the boroughs of Waltham Forest and Newham. 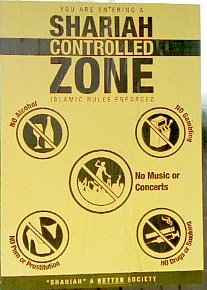 “Officers are working closely with the local authority to have the posters removed as soon as possible,” a police spokeswoman said.

The appearance of the posters coincided with proposed legislation in the House of Lords that sought to stop shar’ia as a parallel legal system to English law; the Arbitration and Mediation Services Bill introduced by Baroness Cox would make it a criminal offense for shar’ia courts to claim legal jurisdiction.

Bishop Michael Nazir-Ali, who was raised in Pakistan, said that “the problem with shar’ia is that it is inherently unequal for certain kinds of people.”

Shar’ia law is inherently biased in favor of patriarchal muslim males, often at the expense of non-muslims and even muslims.

At least one U.S. military serviceman has been arrested in connection with an alleged plot to attack Fort Hood nearly...