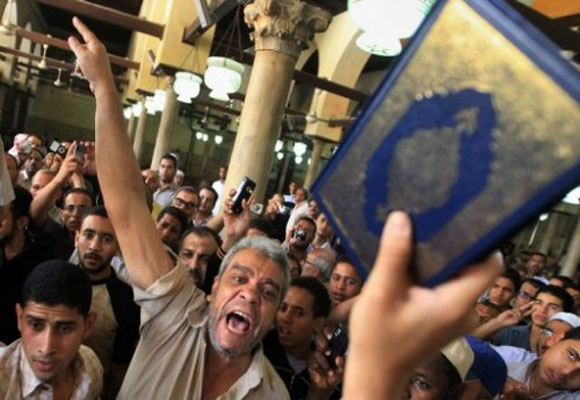 Tens of thousands of Egyptians poured into Tahrir Square on Friday for a day that had been billed as one of unified protest against the interim military government. But the turnout was lopsided, dominated by members of religious movements, ranging from the most conservative, the Salafists, to the relatively more radicalized Muslim Brotherhood.

According to The Associated Press, instead of chanting “The people want to topple the regime,” a slogan heard at protests across the Arab world this year, from Tahrir Square to Tunisia, demonstrators called out, “The people want to implement Sharia,” a strict code of Islamic law.

This video, which was posted on YouTube on Friday, is said to show the Salafists, many of them wearing skullcaps and conservative attire, walking toward Tahrir Square. Men in T-shirts and baseball caps look on as they pass by.

Egypt has been showing increased signs of polarization,  the rift between Islamic religious radicals and secular factions was clearly in evidence on Friday as many secular Egyptians responded to the scene in Tahrir Square on social media sites.

The Egyptian blogger and activist Nora Shalaby wrote on Twitter that the Salafists were “diverting us from the real demands of the revolution bc of their selfishness.”

Another Egyptian blogger, Amr Bassiouny, noted wryly on Twitter that Tahrir Square should hold a contest for the “best beard” and face veil.

(Activist Post) The science behind the anthropogenic global warming theory appears to be falling apart with each new scientific study....