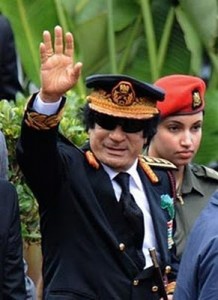 TRIPOLI, Libya — Forces loyal to the fugitive Libyan leader Moammar Gaddafi struck back Monday against the rebel fighters who had swept euphorically into the capital the night before, forcing them to retreat from several strategic locations and tempering hopes that the battle for Tripoli was all but over.

The dramatic appearance Monday night of Gaddafi’s son Saif al-Islam at the Rixos hotel, where the Tripoli-based press corps remains trapped, contradicted the rebels’ assertion the day before that they had captured him and cast into doubt their claim of controlling 80 percent of the capital.

Video footage recorded by the Reuters news agency showed Saif al-Islam being greeted by supporters. “To hell with the ICC,” he said, in reference to the International Criminal Court, which has issued a warrant for his arrest. “We assure the people that things are fine in Libya.”

The BBC and CNN quoted him as telling reporters that government forces had lured the rebels into a trap and “broken the back” of the opposition army and that pro-Gaddafi forces are back in control of the city.

The confusion made the assertion impossible to confirm, but with gunfire and explosions echoing ominously through the streets and Gaddafi’s whereabouts still unknown, it was clear that the capital was far from secure.

President Obama and other world leaders declared an end to Gaddafi’s nearly 42-year-long rule and hailed the courage of the Libyan people. The leaders said they were looking forward to cooperating with a new Libyan government, which presumably would be led by the opposition’s Transitional National Council, based in the eastern city of Benghazi.

Obama cautioned that “the situation is still very fluid.”

“There remains a degree of uncertainty, and there are still regime elements who pose a threat,” he said, speaking from Martha’s Vineyard, Mass, where he is vacationing. But, addressing his remarks to the Libyan people, he said: “The Libya that you deserve is within your reach.”

How close was in question, however, as the uncertainty on Tripoli’s streets appeared only to mount as the day wore on. With Gaddafi himself on the run, it was clear that the epic and often-eccentric rule of the man who once proclaimed himself “king of Africa” had effectively come to a close.

Yet the mystery surrounding his whereabouts and the indications that his loyalists were still capable of mounting resistance in the capital raised echoes of Baghdad in April 2003, when Saddam Hussein slipped away from advancing U.S. troops and later served as a lightning rod for disgruntled regime loyalists, who formed the core of an insurgency that persists to this day.

Rebels in Tripoli said they were confident that Gaddafi was still in the capital, and they erected checkpoints around the city to ensure he did not slip away. “We are winning. It is safe,” said rebel fighter Abdel Azouz, as the sound of explosions and gunfire echoed down the telephone line. “There’s just a few dirty rats here and there who don’t want to give up.”

Azouz acknowledged, however, that Gaddafi loyalists were in firm control of the fortified Bab al-Aziziya compound on the southern edge of Tripoli, where Gaddafi purportedly lived. NATO has targeted the compound so frequently that few Libyans believe he has been staying there recently, but the rebels suspect that he may be hiding in a house somewhere in the area.

The compound is about a mile from the Rixos hotel, where journalists are effectively being held hostage by pro-Gaddafi gunmen in the lobby who are refusing to let them leave.

Speaking on a borrowed telephone because the batteries on his phone had run out, CNN correspondent Matthew Chance said that the hotel was without electricity and that the journalists had gathered for safety in an inside room. “This could go badly wrong,” he told the network. “It’s becoming a lot more ugly here.”

It is also possible that Gaddafi is not in Tripoli but had taken refuge perhaps weeks ago in the southern city of Sabha or the central coastal town of Sirte, his home town and most staunchly loyal stronghold. He has not been seen in public since June, though he has delivered numerous audio statements, most recently as the rebels swept into Tripoli late Sunday.

With the focus now on the capital, it was unclear when or whether the rebels would be able to dislodge Gaddafi’s supporters from Sirte, a heavily guarded garrison town that lies on the coastal highway between the de facto rebel capital of Benghazi and Tripoli, effectively isolating the rebel government from the country’s real capital.

Speaking in Benghazi, council leader Mustafa Abdel Jalil acknowledged that Sirte was going to be a tougher challenge than even Tripoli. He said he was hoping the town’s residents would rise up, as many in Tripoli did, something that seems unlikely given that most of the area’s residents are members of Gaddafi’s tribe.

“Libyans must know and must realize that the coming period will not be a bed of roses,” Abdel Jalil said, adding that the principles of “safety, security, peace and prosperity” will be “achieved through reconciliation, forbearance and tolerance.”

The Transitional National Council is planning to head to Tripoli soon, Abdel Jalil said, but he offered no specifics.

The council leader also hinted at the uncertainty that surrounds his future role, given that most of the rebels who have surged into the capital come from western Libya and do not answer to the rebel command in the distant east.

“My role after the fall of Gaddafi will continue, unless I lose control,” Abdel Jalil said.

But as night fell on Tripoli, it was unclear whether anyone could be said to be in control. Many of the rebel fighters who had surged triumphantly into the capital the night before retreated to Zawiyah, the town from which they had begun their advance the day before, seemingly spooked by the prevalence of loyalist snipers on rooftops.

Several firefights erupted near Green Square, the symbolic heart of the city where revelers had gathered the night before but which stood largely deserted Monday.

And there were other indications that the battle elsewhere still has not run its course. A rebel spokesman in the city of Misurata said a Scud missile, apparently fired from Sirte, had exploded in the sea, causing no casualties but serving as a reminder that Gaddafi’s forces still have considerable weaponry at their disposal. It was the third Scud to hit Misurata in a week, said the spokesman, Mohammed Ali.

There were also reports late Monday that Gaddafi loyalists had launched a fierce counteroffensive against rebels who had seized control of the western coastal town of Zuwarah, near the border with Tunisia. Arish al-Fanousa, a spokesman for the town’s rebels who fled to Tunisia, said loyalist forces had surrounded Zuwarah and subjected it to a 24-hour barrage of shellfire.

Ten U.S Cases in Which Sharia Law Trumped the Constitution in Courts

Below are ten cases of American Muslim Families who have encountered conflicts between the equal protection under the Constitution they...