Two of 13 “demands” posted on the website of the Occupy Wall Street protesters Sept. 25 were for “free college education” and for forgiving student loans (and all other debts.) This wasn’t an “official” list, OWS said. But a survey of 200 protesters by Democratic pollster and Fox analyst Douglas Schoen indicated widespread support for such demands. 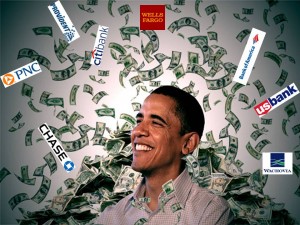 College students are not among those that Algerian revolutionary Franz Fanon called the “wretched of the Earth.” These protesters demonstrate “youthful idealism” by demanding free stuff for themselves.

The collegians have a beef. Many are learning that despite their very expensive educations, they are essentially unemployable. (The unemployment rate among 2010 college graduates is slightly higher than the national unemployment rate.)

But it’s the colleges and universities that charge more and more for less and less that are responsible for their plight, not “Wall Street” or “capitalism.” And no one held a gun to their heads and told them to major in gender studies.

Their very expensive educations taught them little about the economic system they are protesting against, New York Magazine discovered when it polled 50 protesters in Zuccotti Park. Most had no clue what the rich pay in taxes, how the federal government spends its money or what the SEC is supposed to do.

There is one apparent point of convergence. Tea partiers strongly opposed the bailout of Wall Street investment banks facing ruin because of their reckless investments in mortgage-backed securities. In Mr. Schoen’s poll of OWS protesters, 51 percent said the bailouts were unnecessary.

But the OWS protesters have yet to figure out who it was that gave the investment bankers they dislike the bailouts they deplore.

“I understand the frustrations that are being expressed in those protests,” Mr. Obama told ABC News Tuesday. “The most important thing we can do right now is letting people know that … we are on their side.”

Republicans “want to let Wall Street do whatever it wants,” the president said during his bus tour of Virginia and North Carolina.

His brazen hypocrisy would be scorned by the OWS protesters if they weren’t so slow on the uptake.

Although the Emergency Economic Stabilization Act of 2008, commonly known as the “bailout” of the banks, was proposed by President George W. Bush, most Republicans in the House opposed it while most Democrats supported it. Wall Street firms which received bailouts contributed more to Democrats than Republicans.

And still do. Despite his anti-Wall Street rhetoric, Mr. Obama has raised more money from the financial sector than has any Republican.

Why do Wall Streeters give so much to a guy who says such nasty things about them?

Because Democrats fill their pockets with taxpayer money. The investment banks were lent money for virtually no interest. The Obama administration borrowed it back for a 3 percent markup.

“It was very clear by February 2009 that the banks were going to get a free pass,” Simon Johnson, a former chief economist for the International Monetary Fund, told Businessweek.

Then Democrats passed the Dodd-Frank bill, which protects the Wall Street banks that had a lot to do with the housing meltdown at the expense of community banks which had nothing to do with it.

So the president’s feud with Wall Street is a sham. “It probably helps from a political perspective if he’s not seen as a Wall Street guy,” a banker who raises funds for Mr. Obama told The Washington Post.

Few journalists report these facts, so for the time being, Mr. Obama is able to have it both ways. But Mr. Schoen still thinks Democrats are making a “critical error” by embracing the OWS protesters.

Based on his poll, Mr. Schoen said OWS “comprises an unrepresentative segment of the electorate that believes in radical redistribution of wealth, civil disobedience and, in some instances, violence. Virtually all (98 percent) say they would support civil disobedience to achieve their goals, and nearly one-third (31 percent) would support violence to advance their agenda.”

Christianity Under Siege in the USA

Last Week nearly 2.2 billion people celebrate the birth of Jesus. For Christians, there is no happier day. Christianity is...