In 1975, during the Church Committee hearings, the existence of a secret assassination weapon came to light. The CIA had developed a poison that caused the victim to have an immediate heart attack. This poison could be frozen into the shape of a dart and then fired at high speed from a pistol. The gun was capable of shooting the icy projectile with enough speed that the dart would go right through the clothes of the target and leave just a tiny red mark. Once in the body the poison would melt and be absorbed into the blood and cause a heart attack! The poison was developed to be undetectable by modern autopsy procedures. 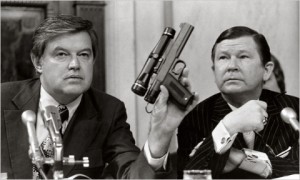 A CIA secret weapon used for assassination shoots a small poison dart to cause a heart attack, as explained in Congressional testimony in the short video below. By educating ourselves and others on vitally important matters like this, we can build a brighter future for us all.

The dart from this secret CIA weapon can penetrate clothing and leave nothing but a tiny red dot on the skin. On penetration of the deadly dart, the individual targeted for assassination may feel as if bitten by a mosquito, or they may not feel anything at all. The poisonous dart completely disintegrates upon entering the target.

The lethal poison then rapidly enters the bloodstream causing a heart attack. Once the damage is done, the poison denatures quickly, so that an autopsy is very unlikely to detect that the heart attack resulted from anything other than natural causes. Sounds like the perfect James Bond weapon, doesn’t it? Yet this is all verifiable in Congressional testimony.

The astonishing information about this secret weapon of the CIA comes from U.S. Senate testimony in 1975 on rogue activities of the CIA. This weapon is only one of many James Bond-like discoveries of the Church Committee hearings, officially known as the United States Senate Select Committee to Study Governmental Operations with Respect to Intelligence Activities.

Could this or a similar secret weapon have been used, for instance, in the recent death of 52-year-old Mark Pittman, a reporter who predicted the financial crisis and exposed Federal Reserve misdoings? Pittman, whose fight to open the Federal Reserve to more scrutiny led Bloomberg News to sue the central bank and win, died of a heart attack on Nov. 25th.

Watch the one-minute video below for the description of a former CIA secretary and Congressional testimony on this secret assassination weapon which caused heart attacks.

In this riveting exposé, five former CIA agents describe how their initial pride and enthusiasm at serving their nation turned to anguish and remorse, as they realized that they were actually subverting democracy and killing innocent civilians all in the name “national security” and promoting foreign policy agendas.

The above-mentioned testimony is from 1975, well over 30 years ago. With the ensuing leaps in technological capability, just imagine what kinds of secret weapons for assassination have been developed since. There is good evidence that technology has even been developed to cause suicidal feelings in a person.

In Case You Missed It:  GEICO Closes All of its 38 California Insurance Offices, Putting Hundreds of People Out of Work: Report
Posted in Freedoms and tagged CIA, Crime, Freedom, Freedom of the Press, US Citizen.