Chief of Staff Benny Gantz said that Israel is strong and will be able to face any potential conflict. 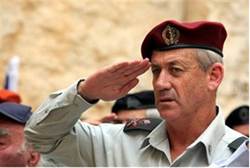 In an interview on Channel 10 News Gantz said, “If you ask me where I want to be a citizen and where civilians are treated properly and from where there is a strong offensive force, we are on the right side of the map. I know where it is more difficult. In the next war no one will ask who won.”

He added, “Israel is a strong country, without that sense of doom from 1967. We have staying power, we are functioning. I say this in a quite responsible manner, from the most threatening place, be it Lebanon with all its 40 thousand missiles or Gaza with all its ten thousand rockets.”

Asked whether Israel would be facing war this coming year, Gantz replied, “I hope not. I do not know. I have no contract with the enemy regarding the date of a war and therefore, all I can tell you is my evaluation of things. I think we are at a critical time. Over the years, the IDF has been improving its abilities. As for the decision making process and considerations of when, why and how, I would like to do that in the appropriate places.”

During his remarks at the Herzliya Conference, Gantz painted a worrying picture of the military threat to Israel, and said the next war Israel fights will be “short and harsh.”

“The threats against Israel have not disappeared,” he said. “What was relevant in the past remains relevant. Eight Syrian military divisions are stationed between the Sea of Galilee and Damascus. These forces are currently inactive, but that may change tomorrow morning.”

“An extraordinary amount of [enemy] ordnance covers every region of Israel,” Gantz said. “Every region in Israel is currently under threat. Our enemies are trying to create a military system that skips over Israel’s defense capabilities and directly targets the strategic depth of the State of Israel.”

Israel recently expressed concern that, should Syrian President Bashar Assad’s regime fall, the Lebanon-based, Syria-supported Hizbullah terror group may obtain Assad’s chemical and biological weapons and use them against Israel.

Palestinian Authority Declares Church in Bethlehem to be Unlawful

The Palestinian Authority declared a Baptist Church in Bethlehem to be unlawful and said that it will no longer receive...