Toulouse-born Avraham Azoulai, editor-in-chief of Le P’tit Hebdo, a publication that caters to French speaking Jews worldwide, held a news conference Sunday, calling upon the French government to crack down on Muslim violence and on French media to stop demonizing Israel. Anti-Israeli incitement in the French press has brought about anti-Semitism, he charged. 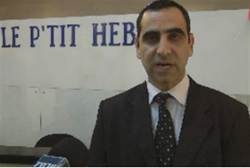 “We do not ask them to be pro-Israeli,” he said of the French press, “but to stop inciting.”

“My friends [in France] live in fear – not just for themselves but for their children,” he told Arutz Sheva. “There is a boycott not just against products but also against people and against thoughts.”

In addition, Azoulai had a message for the French government, calling on it to “rein in the Muslim clans [hamoulas].”

A small percentage of the Muslims in France are “very violent” and the rest are influenced by the media, he explained. “They cannot hurt the IDF and Israel so instead of getting revenge on Israel, they go for the Jews, who cannot do anything.”

Azoulai called on Jews to make aliyah but to do so out of a feeling that Israel is their home – not out of fear.

Americans who feel overtaxed already are in store for a shocker: Obamacare will add 17 new taxes or penalties for...