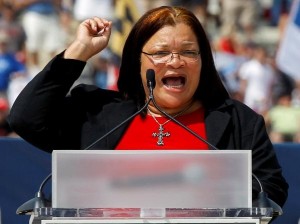 .." Al Sharpton, Jessie Jackson, Maxine Waters, Shelia Jackson and others like you...You are a DISGRACE to our race"

“As conservative blacks, our voices are rarely heard…”

“We unanimously stand together and condemn this blatant display of race baiting.”

I for one am sick and tired of these no growth, negro leaders who do nothing to help our people get out poverty, but they go out of their way to keep racism alive in order to keep blacks from holding them accountable for their liberal policy failures.”

“Al Sharpton, Jessie Jackson, Maxine Waters, Shelia Jackson and others like you… You are a DISGRACE to our race…”

One day you professional race baiters will wake up and discover that your greatest fear is no longer an imaginary white racist republican… but a new army of black conservatives coming back to reclaim our communities!

Conservative activist Dr. Alveda King, now the director of African-American outreach at Priests for Life and the founder of King For America, said she hopes Sharpton and Jackson stop “stirring up the people without positive solutions” in Sanford, Fla., and elsewhere in the U.S.

“I would believe that, by stirring up all of the emotions and reactions, I wanted to encourage them to remember the man that they say that they followed, to remember that his message was nonviolence and very loving,” King told The Daily Caller, referencing her late uncle. She added that she wanted to encourage Jackson and Sharpton “to talk about nonviolence and not to incite people with that race card that they are very good at playing.”

“Nonviolence was a very important part of the life of Dr. Martin Luther King, Jr,” she added. “So, we want to encourage people to be nonviolent in their responses, to be thorough in their research and that justice must be done…We want justice to come, but we want nonviolent responses to this really tragic and terrible incident.”

King hasn’t made up her mind about the facts of this case and who is responsible for what, but believes there should be a full investigation. She told TheDC that she agrees with former Republican presidential candidate and businessman Herman Cain, however, who has asked for a full investigation instead of “swirling rhetoric.”

She said her heart goes out to Trayvon Martin’s family and she understands what they’re going through. “I’m very concerned about Trayvon’s family,” King said. “I’m praying as well, and many members of my family are as well… Several of us have experienced death of family members by shooting.”

“My grandmother, Mama King, Alberta Williams King, was shot in Ebenezer Baptist Church,” King continued. “My uncle, Dr. Martin Luther King, Jr., of course, was shot. And, then, my dad [Alfred Daniel Williams King] was killed the next year, drowned in a swimming pool. So, we are not unfamiliar with these kinds of shocks and tragedies to a family. And, so, my first thought is to pray for the family.”

She said if her father, A.D. King, and uncle, Martin Luther King Jr., were still alive today, they would handle this tragedy much differently from how Sharpton and Jackson have so far.

“I remember when our home was bombed, and my dad went out to the people and he said, ‘please don’t riot, please don’t react violently, my family and I are alright,’” King said. “’If you have to hit anybody, hit me. So please, I’d rather you be nonviolent and don’t strike out.’ So, my uncle would urge a call for justice but he would also urge nonviolence in responses. He would do that, I can assure you he would.”

Moving forward on this storyline, King said Americans “should be watchful for racial profiling, for stereotypical responses.”

“We also should urge people to know that we are one human race,” she said. “We’re not separate races. There’s only one human race.”

King said the news media — which she said was largely responsible for Martin’s story gaining a massive national following — should remember that there are many struggles being encountered by America’s youth.

“I would like for the media to be aware of how dire circumstances are and to be a little more compassionate in reporting and to be fair, of course,” King said. “To be honest and truthful, but to know that we’re dealing with some dire circumstances and this is not a one-time occurrence. There are issues involved here — certainly the racial issue is a question, but it’s not the only thing because we have violence against young people from those who are within their own racial communities and their own ethnic groups.”

King adds that racism still exists in America today, and the American people need to watch for it and fight back the way her uncle, Martin Luther King, Jr., taught. “This is the 21st century and we would all like to think racism is dead in America,” King said. “Actually, that’s not the case, still there are some racial issues that are out across this nation and so we have a responsibility as compassionate citizens of America, no matter what our ethnic group happens to be, to confront these issues when they arise. The best way to confront it is with God’s love, and if my uncle and my father were here today, they’d say that to you: ‘God’s love.’”

Earlier this month, University of California economist Emmanuel Saez released his latest installment on income inequality. Predictably, the media is...