Ten years ago, the IDF carried out a large-scale operation in Judea and Samaria, dubbed ‘Defensive Shield,’ in response to ‘Black March’ – the month of March, 2002, in which Palestinian Authority terrorists murdered 105 Israeli civilians and 26 IDF soldiers, mostly in suicide bomber attacks against civilian targets such as restaurants and buses. 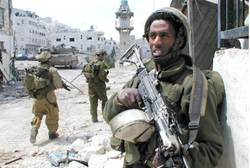 A terrorist attack against the Park Hotel in of Netanya that took the lives of 30 Israeli civilians at their Passover Seder was the final trigger for the IDF operation.

During the operation, IDF forces entered central PA cities including Jenin, Shechem, Bethlehem, Kalkilya, Tul Karem and Ramallah, in order to wipe out the terrorist infrastructure.

Reserve forces were drafted, along with infantry, armored, and combat engineering forces, backed up by IAF aircraft. 29 IDF soldiers were killed in combat, half of them reservists.

29 soldiers were killed in the battle for Jenin. The IDF command – under Defense Minister Binyamin Ben Eliezer of Labor and Prime Minister Ariel Sharon – sent the soldiers into the heavily fortified “refugee” neighborhood on foot, so as to avoid Arab casualties, instead of attacking the terror enclave from the air. A group of soldiers walked into an ambush and 13 were killed.

The IDF Website writes that the soldiers “were forced to fight in a tight urban setting within residential areas, as terror organizations used civilians as human shields.” Operation Defensive Shield began on March 29, 2002, and ended on April 21, or May 10, depending on whether one accepts the IDF Website’s version or that of the Foreign Ministry.

The Israeli Intelligence Terrorism Information Center reported that the operation resulted in an initial drop of 46 percent in the number of suicide bombings – from 22 in February and March to 12 in April and May – and a 70 percent drop in executed attacks between the first half of 2002 and the second half – from 43 in the period from January to June, to 13 in the period from July to December.

While 2003 had a total of 25 executed suicide bombings in comparison to 56 in 2002, and also saw a 35 percent drop in the number of Israeli fatalities from suicide bombings, from 220 deaths in 2002 to 142 in 2003. The unprecedented terror onslaught of 2000-2005 is known by the Arabs as the Second Intifada. In Israel, some call it “the Oslo War,” in a reference to the 1993 Oslo Accords that created the Palestinian Authority, giving Arabs the arms and infrastructure to launch such a murderous campaign from within Israel’s borders.

Rep. Rob Bishop Outlines an Alternative to No Child Left Behind

More than half of states have asked the U.S. Department of Education for a waiver from No Child Left Behind....