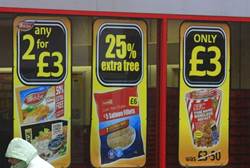 A British supermarket chain is extending a boycott of goods from Israeli communities in Judea and Samaria and will now shun any supplier known to source from these areas.

In a statement released Saturday and quoted by AFP, the Co-Operative Group said, “Following an audit of the Group’s supply chain, it will no longer do business with four companies, accounting for £350,000 worth of sales, as there is evidence that they source from the Israeli settlements in the Palestinian occupied territories.

“The Group will also continue to actively work to increase trade links with Palestinian businesses in the occupied territories,” the statement added.

Store management never sought to use available resources to call the police or take actions against the anti-Israel protesters.

Earlier this week, a ministerial team that had been appointed by the government announced that three communities in Judea and Samaria will be legalized.

The European Union criticized the move, and EU foreign policy chief Catherine Ashton called on Israel to reverse its decision to legalize the three communities.

The United States also criticized the decision, as did France and Jordan and United Nations Secretary-General Ban Ki-Moon, who said he is “deeply troubled” by Israel’s decision to authorize the communities.

Boycotts of products made in Judea and Samaria are nothing new. A major Norwegian pharmaceutical retail chain recently announced that it will be halting the sale of all “products originating from settlements in occupied territories,” including Ahava Dead Sea cosmetics.

In February, the anti-Israel Boycott, Divestment and Sanctions (BDS) movement invaded the Tesco supermarket in Birmingham, removing Israeli goods from the shelves, labeling them with stickers that read “Boycott Israeli Goods,” and urging customers to refrain from buying products made in Israel.

In Case You Missed It:  Hillary Clinton Says She Will “Never be Out of the Game of Politics” – Calls For More Social Media Censorship (VIDEO)
Posted in Financial, Israel and tagged Financial, Freedom, Islam, Israel, Jihad, Judea and Samaria, Palestinians, Terrorism, United Kingdom, United Nations, United Socialist States of America.

Approximately one year after the assassination of Osama bin Laden, a memo written by former CIA Director Leon Panetta has...