Mitt Romney and Rick Santorum are set to have a private meeting on Friday in Pittsburgh, Pa. 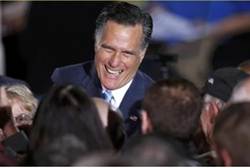 Romney will be looking to gain Santorum’s endorsement – and the delegates that are bound to him under GOP primary rules – prior to the Republican National Convention in August.

Santorum is expected to demand assurances that conservatives and Tea Party Republicans will be represented by the Romney campaign.

The outcome of the meeting – which comes on the heels of Newt Ginrich ending his campaign and calling on Republicans to back Romney – will no doubt will influence the tone and timing of a Santorum endorsement.

No public Romney-Santorum appearance is scheduled.

An endorsement by Santorum, who has suspended his bid for the GOP presidential nomination, would likely help Romney surge forward in his contest with US president Barack Obama.

Obama will hold his first official campaign rallies of the 2012 election Saturday in the battleground states of Ohio and Virginia — both of which he won in 2008.

Virginia Gov. Bob McDonnell, who has campaigned with Romney in Virginia over the past two days, will hold a preemptive press conference on Friday to blunt Obama’s rally.

Obama presently has a 2-3 point lead in the key electoral states of Florida, North Carolina, Ohio and Virginia. However, his lead in the polls has consistently dwindled in recent months and he is now fighting for his political life.

Additionally, the Rasmussen Employment Index slipped another three points in April, bringing the index down to the level measured at the start of 2012.

At 80.7, the index is still above findings throughout 2011, but with perceptions of the economy forming the central issue of the 2012 race, dropping number aids Romney rather than Obama.

On her first visit to China in 2009, Secretary of State Hillary Clinton told Chinese leaders that she considered human...