Israel is hosting the three-day International Interpol Convention, which began on Tuesday in Tel Aviv. 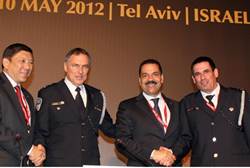 Some 200 senior delegates from law enforcement agencies across 40 European nations are attending the conference, which is headed by Interpol President Khoo Bon Hui and its Secretary-General Ronald Noble. The conference is being hosted by the Israel Police, with Police Commissioner Yohanan Danino taking part in it as well.

One of the central topics discussed at the convention is cybercrime, which has become a global concern. According to Khoo, “Here in Israel alone, a reported number of over 1,000 cyber attacks take place every minute. Experts have estimated that the cost of cybercrime is larger than the combined costs of cocaine, marijuana and heroin trafficking. In Europe, the cost of cybercrime has apparently reached 750 billion Euros a year.”

Noble said that cybercrime “is a crime problem that will continue to grow. From distant havens, cyber-criminals defraud, develop new underground markets for illicit trade, and threaten critical digital infrastructures.”

Noble noted that in addition to the above, “the Internet also facilitates the dissemination of violent, extreme and radical ideologies, enabling radical leaders to reach friendly ears right in our communities and in all corners of the world. The heinous murder, this past March, of three children and a rabbi in a Jewish day school in Toulouse and French soldiers in Montauban, is one tragic example.”

“I know that in Israel, your anti-cybercrime techniques are very good and are something that people from all over the world will want to learn from,” said Khoo, who noted that the Israel Police is very advanced and said that he is sure much will be learned from Israel during the conference.

Noble strengthened Khoo’s comments and said that “cybercrime is an area where the Israeli Police have an extraordinary reputation, worldwide, for being able to investigate, fight it, prevent it, from a crime perspective, a fraud perspective and also from a security perspective.”

He added that “the Interpol National Central Bureau in Jerusalem, that is 100 percent staffed and controlled by the Israeli Police, is one of the fastest in responses, one of the more comprehensive in giving answers and available 24 hours a day, seven days a week. I would put the Israeli Police in the top category, whatever that category might be, in terms of their professionalism and their expertise.”

The CIA, working with allied spy agencies in other countries, has apparently pulled off a real life "Mission Impossible." According...