Bodyguards stepped between Foreign Minister Avigdor Lieberman and Arab MK Talab Al-Sana, who Lieberman called a terrorist during a tour of an illegal Bedouin village in the Negev on Wednesday. 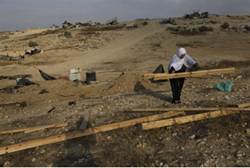 During a visit to the “unrecognized” Bedouin village of Al-Zarnog near Be’er Sheva, MK Al-Sana appeared and accused the Foreign Minister of acting like the head of “a gang” instead of a government official. He charged that Lieberman’s objective is to take the spotlight off 12-year-long criminal investigations against him that have not produced an indictment.

“You already have caused worldwide damage to Israel, and now you have come here to inflame the land from within?” he asked the Foreign Minister.

Lieberman replied sharply with a thinly veiled threat. “I will take care of you. You are a terrorist,” he asserted.

MK El-Sana retorted, “What do you mean you ‘will take care of me’? By using the methods of the mafia?”

At that point, security forces and bodyguards took over and separated the two before the verbal confrontation escalated further.

Unlike a couple of dozen settlements in Judea and Samaria that are determined to be illegal, the official term for hundreds of Bedouin villages is “unrecognized.” The government also has authorized a regional council of “unrecognized” Bedouin outposts that have unilaterally taken over vast regions of the Negev, claiming ancestral rights.

The nationalist Regavim organization, which argues in the courts for Jewish land rights and for equal application of the law against illegal Arab and Bedouin homes, hosted Lieberman’s visit.

“The Al-Zarnog village is an illegal village that was built on private Jewish land, but the Bedouin residents refuse to leave even though the government has offered them to relocate elsewhere,” Regavim explained.

Regavim appealed to the courts two weeks ago to order their expulsion based on the precedent that High Court established against the residents of the Jewish community of Migron in Samaria.

Foreign Minister Lieberman agreed that “it is not reasonable to destroy houses in the Ulpana neighborhood [of Beit El in Samaria] and ignore 100,000 illegal residential structures in the Arab [and Bedouin] sectors in the Galilee in the north and in the Negev.”

Hundreds of Bedouin protestors demonstrated against Lieberman at the village and waved Hamas flags.

The BBC In Its Own Words: “We Made a Mistake”