Conservativepapers , is calling for Christians and Jews to stand in support of Chick-fil-A on Wednesday, Aug. 1. 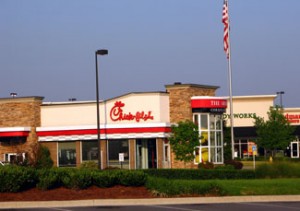 The restaurant chain has come under attack since Chick-fil-A President Dan Cathy voiced his support for the Biblical definition of marriage. Cathy’s comments were followed by calls of a boycott from homosexual groups. The liberal mayors of Boston and Chicago both vowed to use their positions to block the company from opening franchises in their cities.

In response, former Arkansas Gov. Mike Huckabee declared “Chick-fil-A Appreciation Day” on Wednesday to support a business “whose executives are willing to take a stand for Godly family values.”

Franklin Graham is also supporting the cause and urging other Christians and Jews to do likewise.

“I would like to join with Governor Huckabee and ask that, if you live near one of their restaurants, please drop by and let them know how much you appreciate them and their stand,” Graham said.

Graham’s father, evangelist Billy Graham, issued a statement in support of Cathy and Chick-fil-A for its “strong Christian” faith.

“I’ve known their family for many years and have watched them grow Chick-fil-A into one of the best businesses in America while never compromising their values,” he said in the statement. “Each generation faces different issues and challenges, but our standard must always be measured by God’s Word. I appreciate the Cathy family’s public support for God’s definition of marriage. As the son of a dairy farmer who milked many a cow, I plan to ‘Eat Mor Chikin’ and show my support by visiting Chick-fil-A next Wednesday.”

Franklin Graham noted that the company was founded upon and operates by Christian values. Stores remain closed on Sunday, honoring the fourth commandment and giving employees the opportunity to attend church. Chick-fil-A has come under attack before for supporting Biblical principles.

The latest controversy erupted when, in an interview with the Biblical Recordernewspaper, Cathy was asked if he agreed that the Bible’s definition of marriage meant one man and one woman.

“Guilty as charged,” he said. “We are very much supportive of the family—the Biblical definition of the family unit. We are a family-owned business, a family-led business, and we are married to our first wives. We give God thanks for that.”

The story was picked up by other news outlets, and a backlash ensued by advocates of same-sex marriage.

Graham said it is important for conservatives to counter the calls for boycotts by supporting the restaurant.

“The restaurant chain has been, and continues to be, under a concerted attack from same-sex marriage advocates,” he said. “I applaud the courage of Cathy to take a bold stand for the Biblical definition of marriage between a man and woman in a culture that has grown openly hostile to the Christian faith and its followers.”

Graham added that supporting the restaurant for one day is just a skirmish in a much larger battle.

“This is no longer a cultural war; it’s a religious war,” he said. “And the Church of Jesus Christ within America must wake up out of its slumber and stand up and fight for Biblical truth within our society that is increasingly becoming anti-Christian.”

In Case You Missed It:  The Great Reset Crowd's Overreach Will Come Back to Bite Them
Posted in Freedoms and tagged Democrats, Freedom, Liberalism, reli.

Who is responsible for the current economic malaise? If you ask Bill Whittle, it's Obama's pals like David Axelrod, Harry...