A lawsuit has been filed by a consumer-privacy organization demanding answers from the Obama administration about a program by the Office of the Director of National Intelligence, an executive branch office under the control of the 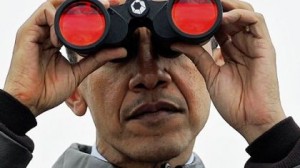 Obama White House, to collect database information about Americans from the CIA, the FBI and the Department of Homeland Security.

According to the Electronic Privacy Information Center, which for nearly 20 years has focused its attention on the civil liberties, privacy, First Amendment and constitutional issues related to electronic data, under Washington’s revised guidelines, “The ODNI plans to obtain and integrate databases containing detailed personal information from across the federal government.

“The data will be kept for up to five years without the legal safeguards typically in place for personal data held by government agencies,” the organization explained.

The complaint was filed under the Freedom of Information Act after the Obama administration didn’t respond to questions from the group about how it plans to collect personal data “from across the federal government,” and how the privacy of Americans will be protected.

The complaint explains that the New York Times documented earlier this year that Attorney General Eric Holder set up guidelines for the National Counterterrorism Center, one of the divisions of ODNI, regarding privacy.

Those changes, the complaint explained, “would relax restrictions on how ODNI analysts may retrieve, store, and search information about Americans.”

“The revised NCTC guidelines allow the NCTC to copy entire datasets in other federal agencies and to analyze the aggregate data,” the complaint, dated Aug. 1, says.

“Under the NCTC guidelines, the NCTC may permanently retain, use, or disseminate data if it is ‘reasonably believed to constitute terrorism information,’ defined to mean if, ‘based on the knowledge and experience of counterterrorism analysts as well as the factual and practical considerations of everyday life on which reasonable and prudent persons act, there are facts giving rise to a reasonable, articulable suspicion that the information is terrorism information.”

The privacy center wants records regarding the way the Obama administration will correct inaccurate or unreliable information, how workers are trained to handle the private information, whether there has been any abuse of the system, and what safeguards and oversight mechanisms are in place.

While the data requests have been acknowledged, no information has been forthcoming, meaning that the administration office “has failed to comply with statutory deadlines and failed to make responsive records available to EPIC.”

Additionally, there’s been no explanation on what data the CIA, which is supposed to be operating only on foreign soil, has on American citizens.

Alarmingly, there have been multiple reports that top key intelligence officials through the Department of Homeland Security and elsewhere in the nation’s team of spies and “spooks” believe those who support third-party presidential candidates, advocate following the Constitution or even hold a pro-life opinion may be terrorists.

The most recent case came when the National Consortium for the Study of Terrorism and Responses to Terrorism, or START, at the University of Maryland, funded by the DHS, recently released a study.

The recent result, “Hot Spots of Terrorism and Other Crimes in the United States, 1970-2008,” noted that nearly one-third of all terrorist attacks from 1970 to 2008 occurred in five metropolitan counties run by Democrats.

Interestingly, the report appears to have key data missing when it comes to Islamic terrorism.

Patrick Poole, writing in PJ Media, noted that the report apparently does not consider the 1993 World Trade Center bombing to be terrorism. Also omitted was a 1994 shooting by Rashid Baz, who killed 16-year-old Jewish student Ari Halberstam and attempted to murder dozens more in a van on the Brooklyn Bridge.

The report also ignores the 2002 shooting at the El Al ticket counter at Los Angeles International Airport. Following the attack, which killed two and wounded four others, the FBI and Justice Department concluded that the shooter, Hesham Mohamed Hadayet, was an Egyptian terrorist who wanted to be a Muslim martyr.

Also, by cutting the report off at 2007, it was able to omit events such as the Fort Hood massacre by Maj. Nidal Hasan, who killed 13 people and wounded 29 others, and the Little Rock Army recruiting center, where a Muslim convert shot soldiers in front of a recruiting office.

Examples of what START considered to be “right-wing” include “groups that believe that one’s personal and/or national ‘way of life’ is under attack and is either already lost or that the threat is imminent.” The report also goes on to describe right-wing “terrorists” as those who are reverent of individual liberty and suspicious of centralized federal authority.

Under such a definition, the Founding Fathers might have been considered right-wing terrorists.

It has reported previously on how the DHS issued another report listing returning veterans and Christians who believed in end-time prophesies as potentially dangerous right-wing extremists.

President Barack Obama is having more difficulty keeping 2008 supporters on his side than Mitt Romney is having holding onto...