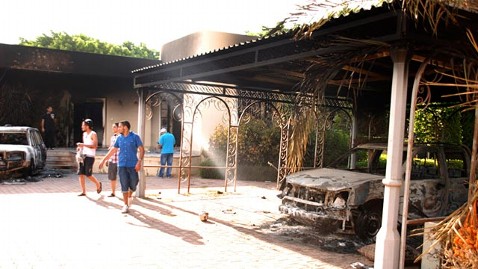 ABC News has obtained an internal State Department email from May 3, 2012, indicating that the State Department denied a request from the security team at the Embassy of Libya to retain a DC-3 airplane in the country to better conduct their duties.

Copied on the email was U.S. Ambassador Chris Stevens, who was killed in a terrorist attack on the diplomatic post in Benghazi, Libya,  Sept. 11, 2012, along with three other Americans. That attack has prompted questions about whether the diplomatic personnel in that country were provided with adequate security support.

No one has yet to argue that the DC-3 would have  definitively  made a difference for the four Americans killed that night. The security team in question, after all, left Libya in August.

But the question – both for the State Department, which is conducting an internal investigation, and the House Oversight and Government Reform Committee, which is holding hearings next week – is whether officials in Washington, D.C., specifically at the State Department, were as aware as they should have been about the deteriorating security situation in Libya, and whether officials were doing everything they could to protect Americans in that country.

Earlier this week, the chair of the House Oversight Committee, Rep. Darrell Issa, R-Calif., and another member of the committee wrote to Secretary of State Hillary Clinton listing 13 incidents leading up to the attack, ranging from IED and RPG attacks to a “posting on a pro-Gaddafi Facebook page” publicizing early morning runs taken by the late Ambassador Stevens and his security detail around Tripoli.

“Was State Department headquarters in Washington aware of all the above incidents?” they asked Secretary Clinton, requesting written responses by Oct. 8. “If not, why not? If so, what measures did the State Department take to match the level of security provided to the U.S. Mission in Libya to the level of threat?”

The subject line of the email, from Miki Rankin, the post management officer for Libya and Saudi Arabia, reads “Termination of Tripoli DC-3 Support.”

Rankin informs Stevens and the others on the email, whose names have been redacted, that Undersecretary of State for Management Patrick Kennedy “has determined that support for Embassy Tripoli using the DC-3 will be terminated immediately. Post’s request to continue use of the plane in support of the SST was considered. However, it was decided that, if needed, NEA will charter a special flight for their departure.” 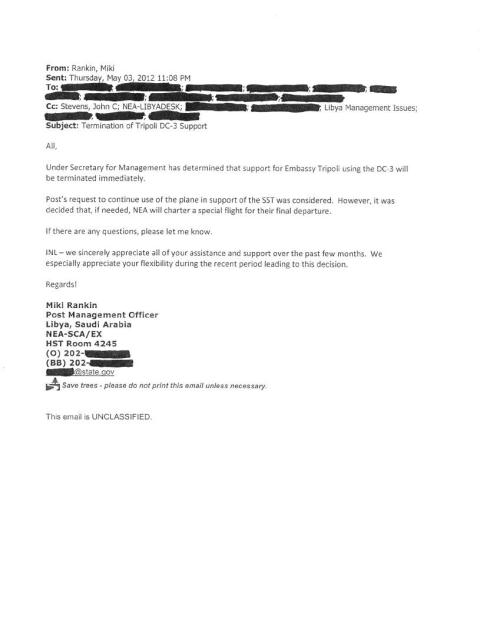 An “SST” is a Security Support Team, about 16 Special Forces troops assigned to protect officials from the U.S. State Department. This particular SST was assigned to the U.S. Embassy in Tripoli.

Shown the email uncovered by ABC News, a spokesman for the committee said the “document is consistent with what the Oversight Committee has been told by individuals who worked in Libya. Ambassador Stevens and the diplomatic mission in Libya made multiple security related requests that were turned down by Washington based officials. Security related transportation has been identified as one of the particular items where embassy personnel did not receive the support they sought.”

Provided with a copy of the e-mail, a senior State Department official downplayed the importance of the denied request. The official told ABC News that “the DC-3 was pulled from Iraq and moved to support Libya early on when there was no commercial airline service into Libya. When commercial service was re-established in Libya, the aircraft was reassigned to other State Department business. We use our aircraft when no commercial flights exist.”

The U.S. government official who provided the email to ABC News – and wanted to remain anonymous because of  the sensitivity of the matter – described the small DC-3 plane as an asset for a security team to more freely and safely move throughout the country, and to more easily transport arms and other security equipment. In short, having the plane allowed the security team to better perform its duties, the official said.

Told of the State Department’s explanation, the House Oversight Committee spokesman said the “State Department’s naive determination to follow rigid bureaucratic policies, instead of making common sense decisions that took the serious threat of terrorism conveyed by those on the ground into account, appears to have been a significant factor in the Benghazi Consulate’s lack of preparedness.”

On Wednesday, Oct. 10, the committee will hold a hearing featuring the testimony of Regional Security Officer Eric Nordstrom, who was stationed in Libya from September 2011 through June 2012; and Deputy Assistant Secretary of International Programs Charlene Lamb.

VP Joe Biden at a campaign event in Council Bluffs, Iowa says that he and Obama want to raise taxes...