Times are changing in the US, where children’s clothes “in-fashion” includes bulletproof vests and backpacks as mass murders become routine. 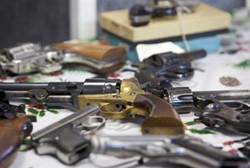 Handguns turned in are seen during a gun buyback event in Bridgeport, Connecticut

The lightweight clothes can protect children from bullets from a pistol or even a sub-machine gun and protect them from meeting the same deadly fate of 20 children in the Sandy Hook school massacre two weeks ago.

The clothes primarily are designed for businessmen and government officials around the world, especially in crime-ridden Mexico and South America.

Shootings at schools and malls have become commonplace in the United States, where dozens of people were killed the past year in headline-grabbing massacres, not including daily murder of victims of theft or rape.

Bogota businessman Miguel Caballero, who has advertised his clothing line by shooting at employees at close range while they wear protective clothing, said his products cost up to several thousand dollars.

A lightweight child-sized vest costs $600 – and comes in a variety of colors, but an American-made model is priced for $100 less.

Even so, the vests won’t stop the bullets used by the Sandy Hook killer, who shot .223 caliber bullets from an AR-15 assault rifle.

In Case You Missed It:  Get Ready for the Economic Collapse
Posted in Freedoms, Terrorism and tagged Freedom, Terrorism, United Socialist States of America.

Iran has ordered domestic airlines to take off half an hour after pre-dawn Muslim prayers, the website of country's civil...