From Business Line in India’s The Hindu 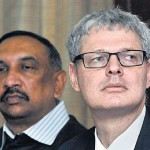 With India and Israel being at an advanced stage of finalising a free trade agreement, the bilateral trade is likely to touch $15 billion from around $5 billion now, said Mr Alon Ushpiz, Ambassador of Israel to India.

“We have concluded three rounds of talks relating to FTA and the fourth round is likely to be taken up in January next. You must understand that FTA is amongst the toughest subjects to deal with and has many aspects before being finalised, including the items to be included. Therefore, we see this being concluded by December 2012 paving way for acceleration of trade between the two nations,” Mr Ushpiz said.

Speaking at an interactive session at the Fapcci here today, the Israeli ambassador said that there are expectations that the bilateral trade would go up to $15 billion between the two. However, he refrained from outlining any time frame for this but added that this spans wide range of areas including technology sharing, hitech, new and renewable energy, and agriculture.

He took out two items from his coat pocket that could potentially play a bigger role. One was a tiny camera based gadget that could be swallowed to get a complete internal picture of the human body and another was a micro chip that powers irrigation sprinklers.

Mr Ushpiz said that pesticides and fertilisers, a part of holistic development of agriculture, would be major thrust areas. An R&D centre on pesticides that helps guide in optimum use and increased production is likely to come up in India. He said that an earlier proposal for a dairy project was awaiting clearances.

Earlier, the Andhra Pradesh Information Technology Minister, Mr Ponnala Lakshmaiah, outlined the potential for cooperation in the areas of technology and the agriculture sectors. He said that the State was investing about Rs 6,000 crore on new dairy mission and any proposals to be part of this were welcome.

New Capabilities for the Military? During his speech tonight, President Obama, in a brief passage, pledged to provide the military...