New US Defence Secretary Chuck Hagel has stirred up a sudden storm in a chai glass here, with past suggestions that India has been using Afghanistan as a “second front” against its old rival Pakistan.

“India has over the years financed problems for Pakistan” in Afghanistan, said Mr Hagel in a 2011 speech at the previously little-known foreign policy seed-bed of Oklahoma University.

If nothing else, it showed what a liability the internet can be for politicians who would wish for their past thoughts to be forgotten.

For Mr Hagel’s Republican opponents, it was just a few clicks’ work to ferret out the speech, get it online via a sympathetic outlet, then picked up 10.5 time zones away.

They must have been pleased at the rapid reaction, with India’s embassy in Washington slapping down Mr Hagel’s comments as “contrary to the reality”. The Pakistani media predictably jumped on the story too. 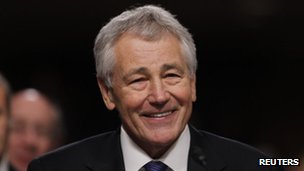 However, having already hurdled charges of being anti-Israel, a last-minute accusation of being anti-India as well wasn’t enough to stop Mr Hagel’s nomination going through.

India is always sensitive about any questioning of its motives for being in Afghanistan. But officials are not that concerned about an old speech, or that the US is now turning against Indian involvement in Afghanistan.

“We have consistently received support and encouragement from our US partners for our constructive role in Afghanistan,” says Syed Akbaruddin, spokesman for India’s ministry of external affairs.

In fact, Delhi has sometimes appeared the reticent one, for example resisting calls from Washington to expand its training of Afghan security forces.

There’s another reason, though, why this little episode may be more significant – because it highlights a bigger question over where relations between Delhi and Washington are going.

The high hopes for a new era of relations after a nuclear deal have “simply not panned out”, says Professor Bharat Karnad at the Centre for Policy Research. 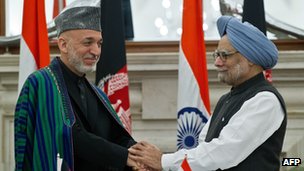 India says the US has supported its “constructive role” in Afghanistan

Instead, the two sides seem mired in misunderstandings and suspicion over everything from arms deals to technology.

And while India shares US concerns about China’s rise, it has been wary of becoming a “cat’s paw” of American interests.

It was former President George W Bush who got things going, ending decades of often frosty relations between the world’s two largest democracies. And many see the end of his time in the White House as the high water mark.

“Republicans are always better for India,” says Mr Karnad. “They have a much better strategic sense than the Democrats.”

In fact, Mr Obama seemed interested in moving things on in his first term, but he seems to have other priorities in his second. And India fears it has lost its best supporters, with Hillary Clinton leaving the state department and Leon Panetta the Pentagon.

An Indian official admits “the jury is still out on Kerry and Hagel”.

Smith/MCT/Newscom The White House warns that sequestration “would reduce loan guarantees to small businesses by up to $902 million”—loans that...