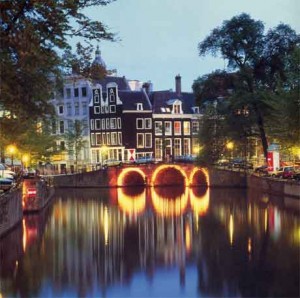 Young Dutch immigrant teenagers expressed admiration for Adolf Hitler and his efforts to murder Jews in a video aired last month on Netherland 2 TV. At the time, Arutz Sheva reported the shocking event, ignored by most of the Dutch and world media, and that resulted – even more shockingly – in the interviewer who criticized them having to go into hiding and receive police protection.

The Wiesenthal Center sent a strong letter of objection to Holland’s prime minister saying “The statements…are deeply dismaying, especially considering that they were made in the country that was the home of Anne Frank…” and adding that “it was even more shocking to hear that during the video the students who spoke claimed that their feelings were shared by native Dutch teenagers, saying ‘Nobody in our school likes Jews’.”

Thank you for your |etter urging me to investigate and combat antisemitic (sic) attitudes such as those expressed in a Dutch television programme last month. I can assure you that the Dutch government fully agrees that those statements were both shocking and reprehensible. We are taking vigorous action to tackle prejudice of this kind. The fight against antisemitism demands both public education and active intervention by civil society: by parents, schools, local government and the people of our neighbourhoods and communities. Where criminal offences have been committed, action must be taken under criminal law. This kind of malice calls for forceful responses from society.

The Dutch government has reached agreement with the Dutch Central Jewish Board (CJO) and the Dutch Centre for Information and Documentation on Israel
(CIDI) on plans to discuss antisemitism with young people. We will also begin discussions with the Turkish Community Advisory Association on antisemitism
within the Dutch Turkish community. These discussions will lay the basis for considering further action. As I write, there are also several surveys being
conducted to deepen our understanding of the nature and extent of antisemitism in the Netherlands.

Antisemitism is a matter of grave concern to me. I hope you will accept my assurance that the Dutch government is doing every/thing possible to fight it in
Dutch society.

Mark Rutte V ,
Prime Minister of the Kingdom of the Netherlands

Arutz Sheva asked Dr. Manfred Gerstenfeld, expert on anti-Semitism, to comment on the PM’s letter. His response is below.

“Over the past few years, there have been three discussions held on anti-Semitism in the Dutch Parliament. They have however, hardly led to any concrete results in the battle against the country’s anti-Semitism.

“Negative news coming out of the Netherlands which impacted upon Jews has continued in the past few weeks. The municipality of the village of Bronckhorst has decided that its official delegation on National Memorial Day this 4th of May, will also honor fallen soldiers of Nazi Germany who are buried in the village, in addition to the Dutch dead during the Second World War. Last year, a judge prevented this, but a Higher Court has since lifted the prohibition.

“MDI, an organization which tracks discrimination on Dutch internet sites found that in 2012, anti-Semitism/Holocaust denial was again by far the chief category of internet hate at 28 percent. It is followed by expressions of hatred of Muslims at 19%. This is against a background where the Muslim population in the Netherlands is around 1 million – at least 20 times the number of Jews.

“MDI concludes that contemporary anti-Semitism has been mainstreamed in the Netherlands. MDI also reported that the Dutch government has eliminated funding for them claiming that this was due to budget considerations.

“Last month, Parliamentarian Dion Graus of the Freedom Party led by Geert Wilders put forward a motion to forbid all ritual slaughter, whether stunned or not. There is no majority support for this position, yet it is another indication of the Dutch obsession with animal rights, which can be contrasted with the “benign” neglect of the country’s anti-Semitism problems.

“It has now become known, more than 65 years after the Second World War, that the city of Amsterdam fined hundreds of Jewish Holocaust survivors for tax avoidance when they were held in concentration camps or hiding from the Nazis.”

All this comes against a background in which the Dutch government has consistently refused to apologize for the failure of the Dutch government in exile in London during the Second World War to meet its responsibilities toward its persecuted Dutch Jewish population. Almost all other European governments have since apologized or admitted guilt for the conduct of their authorities under Germany’s occupation.

As far as Israel is concerned, the Dutch government wants to pass legislation which will impose labeling on all products from the disputed West Bank territories. No such law has been proposed for the Turkish occupation in part of Cyprus and the parts of the Sahara occupied by Morocco.

If the Dutch government is indeed finally committed to act against Dutch anti-Semitism, it will first have to investigate the sources and nature of Dutch anti-Semitism in great detail. Particular emphasis should be placed on the Muslim population, as there are many indications that anti-Semitism there is wider spread and has more severe expressions than within the autochthonous population.

Additionally, all of this must be seen in the context of the extreme demonization of Israel. Almost 39% of the Dutch population believes that Israel intends to exterminate the Palestinians. These data have been concealed by the Dutch media. Any investigation into anti-Semitism in the Netherlands should also examine how this diabolical viewpoint has been arrived at, and who exactly ascribes to it.

Heritage’s Response: Blueprint for a Sustainable and Strong Department of Defense

Polaris/Newscom Yesterday, Secretary of Defense Chuck Hagel gave his first major speech since he was confirmed for the job in...