The Egyptian publication Al-Masry Al-Youm reports that the U.S. government has supplied five containers carrying 140,000 teargas canisters to Egypt’s Interior Ministry. It further reports that this shipment left Wilmington, Delaware, on Mar. 14 aboard the SS Jamestown and that it has just arrived the port of Suez. They cost the Egyptian government just under US$2.5 million. According to ministry spokesperson Hani Abdel Latif, the ministry imported the grenades in order to protect state facilities.

Although shocking, this should not come as a surprise: On Feb. 25, 2013, the State Department spokesman confirmed that “we have approved an export license for the shipment of U.S.-manufactured nonlethal riot control agents to the Egyptian Government.” He added that “No U.S. security assistance funds have been used for the purchase of these products” and “we condemn any misuse of these products, of teargas that can result in injury or unlawful death, and any such misuse would jeopardize future exports.”

Comments: (1) I have waited six days to see if either government would deny that 140,000 canisters were delivered but neither has, suggesting this is an accurate number. (2) The transfer of this arsenal of crowd-control weapons reveals the depth of the Obama administration’s collusion with the wretched Morsi regime. (3) This idiocy alone justifies the title of my lecture in Washington on Apr. 16, “Amateur Hour: The Obama Administration’s Middle East Policy.” (April 14, 2013) 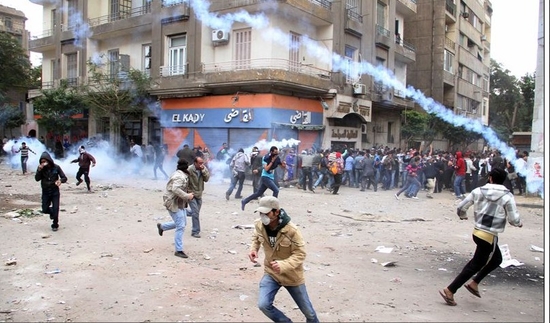 The original “Man of the People,” Thomas Jefferson, was born on April 13 in 1743. Jefferson is best known for...