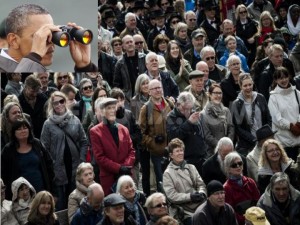 If you were an Islamic extremist plotting to inflict some horrible damage upon the United States and her citizens, would it be easier to find you by spying on every American citizen or just spying on the mosques in our nation? Obama appears serious about corrupting the 4th Amendment to make us all ‘safer’, then obviously the best way to go about it would be to monitor the mosques and the Muslim people who attend them.

If you are a terrorist in the United States, where is the safest place to avoid the authorities? Why, of course, a mosque. Under the Obama regime, our president and his minions are spying on everyone but Muslims.

A just released editorial over at investors.com uncovers the fact that the FBI, NSA, and other federal agencies cannot (and will not) spy on mosques where the terrorist are located in the same manner that they have been spying on the rest of us. While Obama restricted agencies from spying on Mosques the incredible realization is that the most obvious and likely place to find an Islamic extremist is not being surveilled, but the phones, emails, and other personal effects of millions of other Americans is. 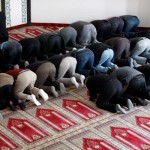 In an attempt to keep us safe from Islamic extremist terrorists, Obama is violating the rights of my 80+ year old Baptist grandfather, but he will not spy on the mosque that has been known to teach Islamic extremist beliefs?

Sure, mi Abuelo (my grandfather for all you anglophiles) who is mostly deaf, can barely see and doesn’t move around so well, definitely needs somebody to keep an eye on him. Might as well be the NSA.

The folks over at Breitbart.com did a little digging and found a near impenetrable wall of Obama’s bureaucracy keeping mosques from being spied upon. Wow, wouldn’t it be nice if our government worked this hard to protect all of our rights? The best thing about the Constitution is that it doesn’t recognize differences between citizens and their rights – so what’s good for the goose (mosques) is also good for the gander (me and my abuelo…and you too).

These kinds of inequalities are what inevitably happen when the government oversteps the lines that have been drawn for it to operate within. It is vital for the health of our democracy and the strength of our liberties that we are all treated the same.

This is particularly disturbing in light of recent independent surveys of American mosques, which reveal some 80% of them preach violent jihad or distribute violent literature to worshippers.

What other five-alarm jihadists are counterterrorism officials missing right now, thanks to restrictions on monitoring the one area they should be monitoring?

In Case You Missed It:  AG Merrick Garland: Domestic Terrorists Fighting For the “Superiority of the White Race” Are the Greatest Threat to the US (VIDEO)
Posted in Terrorism, Tyranny and tagged Islam, Mosques, Muslims, Obama, Terrorism.

Girl Gang Raped by Four Muslims in Pakistan: Dares to Fight for Justice

A new film follows the harrowing true ordeal of a Pakistani family who dared to fight for justice after their...