Coming Soon!
“The Innocence of Islamic Jihad”
The upcoming movie by Imran Firasat 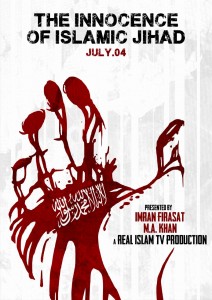 Bombings at a Marathon event in Boston that killed 3 and injured hundreds!

A failed Al-Qaeda linked terror plot to blow up trains in Toronto, Canada!

A British soldier publicly butchered by Jihadists with meat cleavers on a London street!

A French soldier attacked with a knife in Paris!

All this happened in the western world during last 2 months. Islamic Jihadists remain relentless and are intensifying their mission to destroy peace in the world. If they won’t relent from Jihadi violence, what they believe is their sacred religious mission to subjugate the world to Islamic domination, then it is perfectly justified for us to investigate the source of their motivation and analyze the rights and wrongs of their mission. It is not only our constitutionally protected free speech right, but also the only way to cure the Jihadi menace that terrorizes the world today—East and West, North and South.

Understanding the underlying truth of Islamic Jihad, unsavory as it is, is essential for all peace-loving people of the world—whether Muslim or non-Muslim. Jihad is a doctrine enshrined in the sacred scriptures of Islam, which aims to establish the supremacy and domination of Islam over every inch of land on the earth through violence. For safeguarding our human rights and dignity, peace and prosperity, the ideology of violent Islamic Jihad has to be neutralized—more in an educational, peaceful and well-argued way. Military might won’t kill an ideology; education and enlightenment will. Helping the world to understand the foundation and inner-workings of Islamic Jihad is not against the national security of any nation; instead, it is essential for safeguarding and strengthening national as well as global security and peace.

To that end, I am going to release my new animation movie, “The Innocence of Islamic Jihad”, produced in collaboration with M. A. Khan, founder of www.islam-watch.org and author of “Islamic Jihad”) and with the support of Glen Roberts (founder of (www.thereligionofpeace.com) and Abul Kasem (Australia-based Bangladeshi ex-Muslim and writer). Special thanks also go to Peter (U. K.), Natalia (Belgium), Muhammad (Egypt) and Abasi (Egypt) for their voice-recordings for different characters in the movie. The movie is based on four major episodes of Jihadi violence of recent times:

There is also a 15-minute documentary speech in the movie, explaining:

The original movie will be in English, with another with Bangla subtitles—dedicated to Bangladeshi bloggers, recently attacked and killed by Islamic extremists, or detained and prosecuted by the government for expressing their views on Islam.

The purpose of our making this movie is not to provoke or offend Muslims. Our sole purpose is to educate the masses about the real sources, aims, fallacies and dangers of the doctrine of Islamic Jihad, which seriously affects the futures of both the Islamic and non-Islamic worlds—Muslims being its worst victims.

Today we release the trailer of the movie on our official YouTube channel, Real Islam TV (http://www.youtube.com/user/REALISLAMTV). The complete movie will be released on 4 July 2013. The movie is dedicated to the victims of Jihad. And since it will be ready for release around the date of the U.S. Independence Day, we thought it will be good to release it on that day to express our gratitude to the 9/11 Jihad attack victims, the worst victims of Jihad in modern history.

So, don’t forget to watch “The Innocence of Islamic Jihad” on July 4 on the “Real Islam TV” YouTube channel. Until then, enjoy the trailer at http://www.youtube.com/watch?v=W5Dh_wEeI-Q

Syrian Christians: ‘Why Is Obama at War with Us’?

Syrian Christians are asking why Obama supports extremists who want to turn Syria into an Islamic state. That testimony came...