Iran has exploited a loophole in international sanctions to import tons of alumina – a refined version of raw bauxite ore. 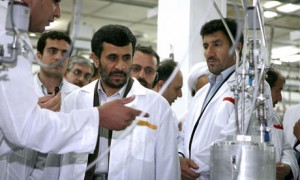 In its high purity or ‘chemical grade’ form, the refined ore can be used for sensitive military applications, such as the production of armor parts and missile components.

Although the United States and European Union have been vigilant in their monitoring of Iran’s nuclear development activities, these imports were not noticed for quite some time.

The sanctions imposed by the EU and U.S. against Tehran targeted steel and other metals. However, the alumina ore – typically used to produce aluminum – did not fall in the category of sanctioned or banned items.

Particularly shocking was the fact that Iran was importing the substance from numerous European countries, including Germany and France.

Export data from independent firm Global Trade Information Services showed that some 4,000 metric tons of alumina was sold to Iran from January 2012 to March 2013. Most of the sales emanated from Germany and France, but some also came from Slovenia, Italy, Hungary, and Belgium, according to an exclusive report in The Daily Times.

Iran paid $700 to $1,000 per metric ton, and imported relatively low amounts at a time, according to the traders and experts who were quoted in the report. Switzerland swapped alumina for aluminum.

To plug the loophole, United States has introduced new and tightened sanctions against the Islamic Republic from July 1 which are meant to prohibit the import of raw or semi-finished metals to Iran.

The tightened U.S. sanctions may also hamper the alumina trade with Iran by European countries, as those who have U.S. interests could be targeted by Washington.

“Any European companies found selling alumina, for example, will face the full weight of U.S. law. Alumina previously has sailed past the radar under previous U.S. and EU sanctions and should not be overlooked again as an important target of pressure,” said Mark Dubowitz, who has advised President Barack Obama’s administration and U.S. lawmakers on sanctions.

In Case You Missed It:  Biden in SoCal: “You Either Keep Newsom as Your Governor or You’ll Get Donald Trump – Not a Joke” (VIDEO)
Posted in Terrorism and tagged Europe, Financial, Iran, Islam, Jihad, Nuclear Weapons, Obama, Terrorism, United Socialist States of America.

McDonalds Franchise Owner in Israel is a Defeatist Leftist