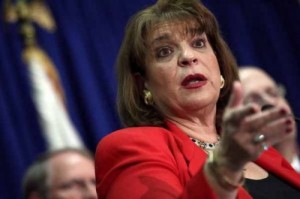 Shortly after Dershowitz’s criticisms, Harvard Law School’s dean’s office received a phone call. When the dean refused to pick up, Angela Corey spent a half hour demanding of an office-of-communications employee that Dershowitz be fired. According to Dershowitz, Corey threatened to sue Harvard, to try to get him disbarred, and also to sue him for slander and libel. Corey also told the communications employee that she had assigned a state investigator — an employee of the State of Florida, that is — to investigate Dershowitz. “That’s an abuse of office right there,” Dershowitz says.

What happened in the weeks and months that followed was instructive. Dershowitz says that he was flooded with correspondence from people telling him that this is Corey’s well-known M.O. He says numerous sources — lawyers who had sparred with Corey in the courtroom, lawyers who had worked with and for her, and even multiple judges — informed him that Corey has a history of vigorously attacking any and all who criticize her. But it’s worse than that: Correspondents told him that Corey has a history of overcharging and withholding evidence.

The Zimmerman trial is a clear case of the former and a probable case of the latter. Zimmerman was charged with second-degree murder, also known as “depraved mind” murder. The case law for that charge, an attorney who has worked in criminal prosecution outside Florida tells me, is near-unanimous: It almost never applies to one-on-one encounters. Second-degree murder is the madman who fires indiscriminately into a crowd or unlocks the lions’ cage at the zoo. “Nothing in the facts of this case approaches that.” Which Angela Corey, a veteran prosecutor, should have known, and a grand jury would have told her. In fact, both the initial police investigation and the original state attorney in charge of the case had determined exactly that: There was no evidence of any crime, much less second-degree murder

But that did not stop Corey from zealously overcharging and — the facts suggest — withholding evidence to ensure that that charge stuck.

Still, by the end of the case it was clear that the jury was unlikely to convict Zimmerman of second-degree murder; hence the prosecution’s addition of a manslaughter charge — as well as its attempt to add a charge for third-degree murder by way of child abuse — after the trial had closed. “In 50 years of practice I’ve never seen anything like it,” says Dershowitz. It’s a permissible maneuver, but as a matter of professional ethics it’s a low blow.

Corey’s post-trial performance has been less than admirable as well. Asked in a prime-time interview with HLN how she would describe George Zimmerman, Corey responded, “Murderer.” Attorneys who spoke with me called her refusal to acknowledge the validity of the jury’s verdict everything from “disgusting” to “disgraceful.”

But will Corey ever be disciplined for prosecutorial abuses? It’s unlikely. State attorneys cannot be brought before the bar while they remain in office. Complaints can be filed against Corey, but they will be deferred until she is no longer state attorney. The governor can remove her from office, but otherwise her position — and her license — are safe.

Meanwhile, those who speak out against her continue to be mistreated. Ben Kruidbos (pronounced CRIED-boss), the IT director at Corey’s state-attorney office, was fired last week — one month after testifying during the Zimmerman trial that Corey had withheld from defense attorneys evidence obtained from Trayvon Martin’s cell phone. Corey’s office contends that Kruidbos was fired for poor job performance and for leaking personnel records. The termination notice delivered to Kruidbos last Friday read: “You have proven to be completely untrustworthy. Because of your deliberate, wilful and unscrupulous actions, you can never again be trusted to step foot in this office.” Less than two months before this letter, Kruidbos had received a raise for “meritorious performance.”

The records in question — Kruidbos maintains he had nothing to do with leaking them — revealed that Corey used $235,000 in taxpayer money to upgrade her pension and that of her co-prosecutor in the Zimmerman case, Bernie de la Rionda. The upgrade was legal, but Harry Shornstein, Corey’s predecessor, had said previously that using taxpayer funds to upgrade pensions was not “proper.”

Meanwhile, while Kruidbos has been forced out of the state attorney’s office, the managing director who wrote his termination letter — one Cheryl Peek — remains. In 1990 Peek was fired from the same state attorney’s office by Harry Shornstein’s predecessor, Ed Austin, for jury manipulation. Now, as managing director for that office, she trains lawyers in professional ethics.

Since her election, Corey seems to be determinedly purging from the ranks any who cross her and surrounding herself with inferiors whose ethical scruples appear to mirror her own. Meanwhile, those she chooses to victimize — most recently, George Zimmerman — far too often have little recourse.

“Make crime pay,” Will Rogers once quipped: “Become a lawyer.” Angela Corey seems to be less interested in making crime pay than in making her critics pay.

Alan Dershowitz also told “The Steve Malzberg Show” on that Zimmerman has reason to launch a defamation of character case against Corey.

“Clearly he is somebody who was acquitted by a jury on the grounds of self-defense and she shouldn’t be going around second-guessing the jury verdict and calling him a murderer,” the veteran Harvard Law professor said.

“He probably has a defamation action against her. She has no immunity as a prosecutor for appearing on television

—By Ian Tuttle  an editorial intern at National Review.

In Case You Missed It:  CDC given $1 billion to push covid vaccine propaganda, funded by the very same taxpayers being damaged by vaccine adverse events
Posted in Freedoms and tagged Florida, Freedom, Liberalism.

Student Suspended for Requesting English be Spoken in Arizona Classroom

Arlington, VA – ProEnglish is providing legal support for a student who was suspended merely for asking that students speak...