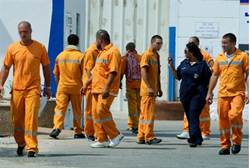 Let the spin begin: A PA letter obtained by Haaretz urges its diplomats to emphasize that prisoners to be released are “freedom fighters” and “political prisoners.” You can guess who the real terrorists are:

The letter, which was distributed by the Palestinian Embassy in Santiago, Chile, a day after the cabinet’s decision on the prisoner release, claimed that Israel is the one terrorizing the Palestinians, and not vice-versa. “A terrorist is someone who forcefully occupies the other’s land, expels him and comes to live in his place,” the letter read, “…not the Palestinian political prisoner, the freedom fighter.”

For more spin games, the London Jewish Chronicle draws attention to statements by PA officials Nabil Abu Rudeinah and Yasser Abed Rabbo that any peace deal would only bind the Palestinians temporarily.