In a report that is sure to be considered blockbuster news, the rebels told Dale Gavlak, a reporter who has written for the Associated Press, NPR and BBC, they are responsible for the chemical attack last week. 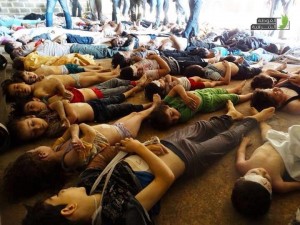 Gavlak is a Middle Eastern journalist who filed the report about the rebels claiming responsibility on the Mint Press News website, which is affiliated with AP.

In that report allegedly the rebels told him the chemical attack was a result of mishandling chemical weapons.

This news should deflate the accusations, against the Assad regime, coming from the U.S., Britain, France and the Arab League.

Since the chemical attacks last week, the Assad government was immediately blamed. On Monday, Secretary of State John Kerry said: That Assad’s guilt was “a judgment already clear to the world,” according to theguardian.com.

As a result of Assad’s government being blamed for the chemical attacks, five U.S. warships are now stationed off Syria‘s coast. These destroyers are poised to deliver cruise missiles in a strike that is due to begin any time now. According to the report on Mint Press there have been several interviews conducted with people in Damascus and Ghouta, a suburb of the Syrian capital.

The interviews conducted of residents, rebels and their families in Damascus and Ghouta are painting a different picture of what actually happened. Many believe that rebels received chemical weapons provided through the Saudi intelligence chief, Prince Bandar bin Sultan. It’s being reported that these weapons are responsible for last week’s gas attack.

The father of a rebel who was killed in what’s now being called an accident by many in Ghouta and Damascus said: “My son came to me two weeks ago asking what I thought the weapons were that he had been asked to carry,” said Abu Abdel-Moneim. The father said at least 12 rebels including his son were killed by the chemical weapons.

Allegedly they were killed in the tunnel that was used to store the chemicals. These were provided by a Saudi militant, known as Abu Ayesha. He is said to be leading a fighting battalion in the effort to unseat Assad. The weapon was described as a “tube-like structure” by Abdel-Moneim.

Gavlak reports he was told by rebels that the gas “attack” was the result of rebels mishandling the chemical weapons they acquired from the Saudis. He says in the Mint Press report the following: 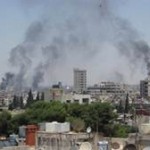 When Saudi Prince Bandar gives such weapons to people, he must give them to those who know how to handle and use them,” she warned. She, like other Syrians, do not want to use their full names for fear of retribution.”

Gavlak continues in his report: “A well-known rebel leader in Ghouta named ‘J’ agreed. “Jabhat al-Nusra militants do not cooperate with other rebels, except with fighting on the ground. They do not share secret information. They merely used some ordinary rebels to carry and operate this material.

We were very curious about these arms. And unfortunately, some of the fighters handled the weapons improperly and set off the explosions, ‘J’ said.”

The humanitarian agency, Doctors Without Borders, reported that around 355 people had died from what was believed to be a neurotoxic agent. They reportedly treated 3,600 people with symptoms of, frothing at the mouth, respiratory distress, convulsions and blurry vision.

According to the report dozens of rebels said they were receiving salaries from the Saudis.

It’s said that Bandar was educated in the U.S. both military and collegiate. He is also said to have “served as a highly influential Saudi Ambassador to the U.S., and the CIA totally loves this guy.”

Prince Bandar’s intelligence agency is said to have been the first to bring allegations that Assad’s regime used Sarin gas in Feb.

What kind of person gives someone chemical weapons and doesn’t tell them? As a result of the Saudis giving the rebels chemical weapons hundreds of innocent people died. Not mention the fact that evil men here in the U.S. and elsewhere are trying to draw us into a war we have no business being involved in.

Isn’t there enough heartache, strife, sickness, poverty, injustice and a host of other ills in this world? These evil men just added more heartache into the world by giving the rebels these chemical weapons. The hearts of the men responsible for this are black and they only care about one thing, destroying nations.

This kind of evil happens because of sin and mankind’s rebellion to God’s word. Little do these men realize is that nothing in all creation is hidden from God’s sight. Everything is uncovered and laid bare before the eyes of him to whom we must give account, Hebrews 4:13.

Rest assured that God has seen this vile act, and every person involved will have to answer for their crimes against humanity on judgment day. Hopefully, this breaking news will be enough to keep the United States from going to war. The result of bombing Syria will be a match that will light the fuse to an all-out war in the Middle East.

Please note that if you have trouble accessing the Mint Press News article be patient and keep trying. This report is said to have generated a lot of traffic to their site.