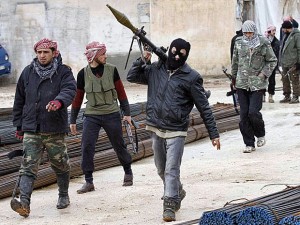 Opposition forces battling Bashar al-Assad’s regime in Syria now number around 100,000 fighters, but after more than two years of fighting they are fragmented into as many as 1,000 bands.

The new study by IHS Jane’s, a defence consultancy, estimates there are around 10,000 jihadists – who would include foreign fighters – fighting for powerful factions linked to al-Qaeda..

Another 30,000 to 35,000 are hardline Islamists who share much of the outlook of the jihadists, but are focused purely on the Syrian war rather than a wider international struggle.

There are also at least a further 30,000 moderates belonging to groups that have an Islamic character, meaning only a small minority of the rebels are linked to secular or purely nationalist groups.

The stark assessment, to be published later this week, accords with the view of Western diplomats estimate that less than one third of the opposition forces are “palatable” to Britain, while American envoys put the figure even lower.

Fears that the rebellion against the Assad regime is being increasingly dominated by extremists has fuelled concerns in the West over supplying weaponry that will fall into hostile hands. These fears contributed to unease in the US and elsewhere over military intervention in Syria.

Charles Lister, author of the analysis, said: “The insurgency is now dominated by groups which have at least an Islamist viewpoint on the conflict. The idea that it is mostly secular groups leading the opposition is just not borne out.”

The study is based on intelligence estimates and interviews with activists and militants. The lengthy fighting has seen the emergence of hundreds of separate rebel bands, each operating in small pockets of the country, which are usually loyal to larger factions.

Two factions linked to al-Qaeda, Jabhat al-Nusra and the Islamic State in Iraq and the Levant (ISIL) – also know as the Islamic State of Iraq and al-Shams (ISIS) – have come to dominate among the more extremist fighters, Mr Lister said. Their influence has risen significantly in the past year.

“Because of the Islamist make up of such a large proportion of the opposition, the fear is that if the West doesn’t play its cards right, it will end up pushing these people away from the people we are backing,” he said. “If the West looks as though it is not interested in removing Assad, moderate Islamists are also likely to be pushed further towards extremists.”

Though still a minority in number, ISIL has become more prominent in rebel-held parts of Syria in recent months. Members in northern Syria have sought to assert their dominance over the local population and over the more moderate rebel Free Syrian Army (FSA).

The aim of moderate rebel fighters is the overthrow of their country’s authoritarian dictator, but jihadist groups want to transform Syria into a hard-line Islamic state within a regional Islamic “caliphate”.

These competing visions have caused rancour which last week erupted into fighting between ISIL and two of the larger moderate rebel factions.

A statement posted online by Islamists announced the launch of an ISIL military offensive in the eastern district of Aleppo which it called “Cleansing Evil”. “We will target regime collaborators, shabiha [pro-Assad militias], and those who blatantly attacked the Islamic state,” it added, naming the Farouq and Nasr factions.

Al-Qaeda has assassinated several FSA rebel commanders in northern Latakia province in recent weeks, and locals say they fear this is part of a jihadist campaign to gain complete control of the territory.

As well as being better armed and tougher fighters, ISIL and Jabhat al-Nusra have taken control of much of the income-generating resources in the north of the country, including oil, gas and grain.

This has given them significant economic clout, allowing them to “win hearts and minds” by providing food for the local population in a way that other rebel groups cannot.

ISIS has also begun a programme of “indoctrination” of civilians in rebel-held areas, trying to educate Syria’s traditionally moderate Sunni Muslims into a more hard-line interpretation of Islam.

In early September, the group distributed black backpacks with the words “Islamic State of Iraq” stamped on them. They also now control schools in Aleppo where young boys are reportedly taught to sing jihadist anthems.

“It seems it is some sort of a long-term plan to brainwash the children and recruit potential fighters,” said Elie Wehbe, a Lebanese journalists who is conducting research into these activities.

House Cloakroom: Analysis: This week, the House may move its attention to a food stamp bill that would reduce spending...