The International Tennis Federation (ITF) made a surprising move against discrimination, announcing on its website Saturday that Tunisia has been suspended from the prestigious Davis Cup for one year as a punitive action for boycotting an Israeli player. 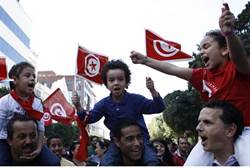 The decision of the ITF Board was unanimous and final, although a Tunisian board member excused himself from the vote.

ITF President Francesco Ricci Bitti condemned prejudice, saying “the ITF Board decided to send a strong message to the Tunisian Tennis Federation that this kind of action will not be tolerated by any of our members.”

Sports Illustrated reports that Tunisia’s tennis federation had ordered its top player, Malek Jaziri, who is ranked 169th in the world, to withdraw from the quarterfinals match of an ATP Challenger tournament in Uzbekistan against Israeli opponent Amir Weintraub.

Jaziri’s brother Malek told the AFP that the decision is “shocking, because it brings politics into sport…we are totally against that. And Malek is the first victim, because tennis is his career.”

Both Jaziri and Weintraub are members of the same tennis club in France, Sarcelles Tennis, and have known each other for years according to The Age. The tennis club’s president told AFP that Jaziri in fact was the reason for Weintraub’s recruitment by the club.

Despite the ITF’s action against prejudice, the organization has not always been free of discrimination itself. In August it penalized and fined the Israeli team for not playing on the Jewish holiday of Yom Kippur.

Who Is Affected by Obamacare? EVERYONE

In response to the wave of insurance cancellations hitting millions of Americans, and the admission by some on the left...