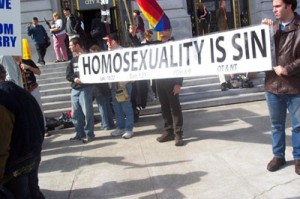 Russia remains stalwart in its laws that aim to curb the influence of the West’s gay-friendly culture on Russian youth and choose to honor the traditional family instead.

Meanwhile, last week, in a stunning turn of events, India’s high court reinstituted a nineteenth-century law against sodomy, and made homosexuality illegal as well.

I cannot blame Russia, India, or any nation for reacting to what they see in the West with measures that I would ostensibly oppose on principle. Russia’s ban on promoting homosexuality to children does impinge on free speech. India’s ban on sodomy is an intrusion into the sex lives of consenting adults. But we don’t live in an ostensible world. We live in a real world, where there are real gay organizations in the West, who are engaging in real machinations to spread their sickness all over the globe.

It’s time to admit it, my gay brothers: Homosexuality is sick.

Gay male culture in the United States, Canada, Latin America, and much of Europe is sick. It is literally plagued with disease — not only HIV (which is rising again), but also syphilis (which has made a comeback). And Michelangelo Signorile, the dowager prince of gay news at the Huffington Post, admitted at long last what gay watchdog groups had been denying for decades upon decades: the chronic, timeless state of the homosexual man is to chase after pubescent boys.

Signorile has been busy defending 39-year-old Dustin Lance Black, the screenwriter who seduced a 19-year-old boy — and yes, a teenager is a boy, period, even if he is a gold medalist; for heaven’s sake, he can’t even legally drink alcohol in the U.S. Signorile called the sleazy predation “intergenerational sex” and explained to all the “homophobic” people who might object that in the gay world, it’s normal for old men to sodomize boys.

Signorile says this is “nurturing” and educational, kind of like being someone’s private tutor, only the tutelage involves lubricant, preparatory enemas, and the tearing of the boy’s rectal lining, all in the name of initiation. It’s also unsanitary, painful, and likely to interfere with whatever development the boy might have toward eventual sex with women.

Two weeks after Signorile’s ode to sleaze, the Daily Mail broke yet another story of a homosexual dad sodomizing a boy and sharing him with his male partner. This time, the boy in question was not a teen, but nine, and he was Carl Herold’s own son. So in two weeks we go from “it’s legal, so why not?” to “oh, darn, it’s illegal; I guess I shouldn’t be encouraging this.”

Scratch that second quote, since the gay writers at Salon and such will never admit wrongdoing. I assume Michelangelo Signorile would rather die than admit that by glamorizing the act of sodomy between men and boys, he would have anything to do with Carl Herold’s rationalizing of his own kind of “nurturing” “intergenerational” sex. Sometimes the people who are plunging down the slippery slope don’t see the slippery slope; those of us standing at the top screaming “stop the madness” can see it, but nobody listens to us.

Because part of the gay world’s sickness is the diabolical insistence that people are “born” gay, gays like Signorile and Black think of boys as already certified gay flowers waiting to be plucked. Often this comes from their having rewritten their own childhood and adolescence, to convince themselves, as so many vocal gay men do, that they knew they were gay from the time they were five. All of which is nonsense. Read the work of researcher Lisa Diamond. Sexuality is fluid well into our twenties. She focuses on women, probably because she doesn’t want to deal with bitchy gay men despising her for playing into the hated “ex-gays'” hands, but the same goes for men. Sexuality is fluid. If you sodomize a boy when he’s a teenager, you’re imposing your homosexual narrative on him, not awakening something that’s inside him waiting to blossom.

But to understand these truths, gay men would have to tune out the cacophony of rhetoric tied to National Coming Out Day, It Gets Better, Gay-Straight Alliances, and all the other civic institutions devoted to convincing the whole West of the lie that people are born gay and teens need to expedite an online profile so the buzzards can circle overhead, looking for fresh meat.

I used to avoid assessing the motives of others at all costs. But I can’t help supposing that the myth of people being born gay served a very useful purpose of justifying “intergenerational” sex as some sort of “teachable moment” rather than what it is: selfish, sleazy, old gay men sodomizing boys.

Do I speak as an outsider? Am I a homophobe? Nope — sorry, GLAAD. I know what the heck I’m talking about, and I suspect you know I know. I was first sodomized at the age of thirteen, and between the ages of thirteen and my twentieth birthday, I would estimate that I was used by at least thirty older men, ranging in age from sixteen to sixty-five. Once I was “broken in,” my mind went into a tailspin, and I kept convincing myself that I was the predator, not the old men. I took the fatherly affections as they came, largely because I didn’t have a father in my home and I liked having a dad’s love, even if it was only fleeting. So I prowled in university libraries, city parks, twenty-four-hour supermarket parking lots, and the sauna at the YMCA. There were men at every turn, willing to be my dad if I would simply give them what they wanted.

This wasn’t nurturing. It’s never nurturing, Mr. Signorile. By twenty I was a sick human being, like so many people in the gay world, living in the soulless shadows. It would take me another eight years until finally, loosened up with wine, I made love to a female and realized that I’d been wrong and confused about myself, because my mind had been messed up by older men molesting and abusing me.

I say this not to brag or ask for pity, but merely to explain that Signorile’s model of “nurturing” intergenerational sex is destructive and sick.

The Big Lie – What are you going to do about it, America?

Gay advocacy groups made sure, for decades, that anybody who even alluded to homosexuals seducing teenage boys would be placed on one of their many pointless blacklists as “homophobes.” Yours truly has been repeatedly labeled an “antigay activist” because I wrote articles in the American Thinker discussing the rash of high-profile cases in which older men abused boys, ranging from the rape of teenage foster sons to the nauseating case of Mark Newton and Peter Truong manufacturing a son with an illegal surrogate, smuggling the boy back to Australia, and turning him into a sex slave.

Seemingly in tandem with the new shameless gay zeitgeist, Apple Inc. added to the sickness by unveiling a new phone application that will allow twelve-year-old boys to transmit their location and signal their availability for sex.
I have stopped asking, “Where are the parents?” Half the time, the parents are encouraging it. For instance, it seems the mother of a fourteen-year-old boy encouraged her son to have sex with Caleb Laieski, the older teen activist honored by President Obama at the White House, and a 43-year old homosexual policeman. The parents of Tyler Clementi, who killed himself after a 30-year-old man went into his freshman dormitory and a roommate filmed it, didn’t focus their outrage at the gay man who was having sex with a boy who happened to be their son. Instead, Clementi’s mother appeared in the New York Times blaming herself and her church!

Over the last few years I have pondered the question — what would have happened had the gay rights movement not made so many mistakes? What if they had focused on building up a functional, healthy gay culture, rather than ignoring the problems under their noses and waging pointless symbolic wars over marriage, not to mention the fool’s errand of adoption, which is the wrong thing to propose to a community full of men who sodomize boys?

Back to Russia and India

Perhaps, if the West’s gay community had not become so sick, there would be no “anti-gay” law in Russia, and perhaps the judges in India would have been less inclined to uphold the ban on sodomy. We will never know what might have been. We know what is. The West’s gay community is sick, and I cannot blame countries outside the West for deciding to take extreme measures.

The gay men who form the bulk of our community are resourceful to the point of deviousness. They have carved holes in stalls between toilets, developed elaborate secret code for wall graffiti, and learned how to lure boys into sex without being caught.

They are not the type to ignore a loophole, and the West’s openness about homosexuality has given them loopholes that a train could pass through. Entrusted with the future of their own families and children, Russians and Indians may be, in the end, doing the right thing. Here’s where the pope’s quote really means something: “Who am I to judge?”

Related:
Has The Normalizing of Pedophilia Begun?

Obama Tries to Prevent Judge From Ruling on Surveillance

WASHINGTON — The Obama administration moved late Friday to prevent a federal judge in California from ruling on the constitutionality...