For the racist media, 2013 was another bad year. 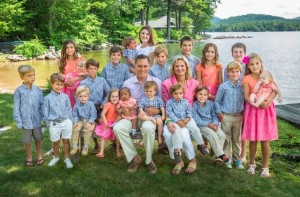 It culminated with the hideous display on MSNBC where a gang of nasty jabber-mouth panelists played the “knockout” game on Mitt Romney and his adopted black grandchild.

Now there has been a lot of this “knockout” game going around where thugs sneak up on unsuspecting victims and cold-cock them to the pavement. The goal is for innocents to drop like sacks of potatoes, without even a defensive flinch. It has been done to young people, mothers, students, elderly men and even elderly women.

But never before has such an attack been caught on video where it was performed so ruthlessly against a defenseless infant.

Since you, like most Americans, do not watch MSNBC and have never heard of any of these thuggish characters, I will describe what they did.

A silly woman who apparently hosts a show on the network produced a Christmas picture of Romney sitting proudly with his 22 grandchildren, including the black infant adopted by Romney’s son and daughter-in-law. This host asked her assembly of Neanderthal guests to offer a caption for the photo.

In America, of course, people would comment on what a blessing it is to have 22 grandchildren altogether and looking healthy. In America, if anyone were to comment on the one pigmented child, it would be to note what a beautiful thing adoption is.

But we are not talking America. We are talking about the racist media where true hatefulness lies.

The first Neanderthal guest began singing the Sesame Street song. “One of these things is not like the others.” You see, the primary weapon of a racist is to first see the differences among people and then separate out the minority to make them feel excluded.

Another guest who describes himself as a “comedian,” said the picture “really sums up the diversity of the Republican Party.” Ha ha ha ha. This person also provides commentary for CNN.

Then the host tried to dabble a little in comedy herself, opining what it would be like if the baby grew up to marry the daughter of rapper Kanye West. The thought of Mitt Romney and the rapper from suburbia as in-laws apparently tickled the woman.

Needless to say, if all of this were reversed and it was a liberal Democrat whose adopted black grandchild were victimized by the media knockout game, the left would be in an untamed uproar. Al Sharpton would demand a boycott. Of course, he would do that right there on his show carried by MSNBC.

GLAAD would demand that the host and guests all be fired. The New York Times would write scathing editorials about the rise of the old racist Republicans — refusing once again to acknowledge that it was the old Southern Democrats who pioneered and perfected that sick game.

As disgusting as all of this is, perhaps the most despicable aspect of it is that while the media loves to fan the flames of racial discord, they blanch and run like screaming weenies at the sight of actual stories that raise serious and difficult questions about race, such as the shockingly high rates of criminal violence in black neighborhoods. Are they so racist that they simply do not care because in the vast majority of those cases the victims are black?

In Charlottesville two weeks ago, a marauding gang of three black thugs targeted a white couple enjoying a little pre-Christmas revelry on the downtown mall. They savagely beat the man and punched the woman when she begged for mercy and threw open her purse for them to take cash.

The “Clockwork Orange”-style savagery was interrupted only long enough for the beastly droogs to laugh and joke and bro-hug over their ongoing conquest. Then back to the old ultraviolence.

Though the woman snapped numerous pictures of the violent criminals, the Charlottesville police did little to investigate. Finally, after more than a week, the alternative weekly in the city wrote a story. Only then did the rest of the media follow suit and the police promise to investigate.

As of Tuesday afternoon, the violent criminals remained at large, perhaps seeking their next victim.

In Case You Missed It:  The Dark Winter DIE-OFF begins: Mass vaccination deaths collide with engineered starvation and the collapse of gas and energy
Posted in Freedoms and tagged Democrats, Liberalism, Mitt Romney, Racism.

There have now been three major jihad terror attacks in Russia in four days. The attacks are a grim reminder...