As of March 18, 2014, state demographers have reported that Hispanics have surpassed White (non-Hispanic) people as the majority in the state of California by a percentage of 39% to 38.8%.

If this comes as a surprise to you, it shouldn’t.  Sociologists have been reporting this would happen since last year, but claim that low Hispanic birthrates are what delayed this from happening earlier.

This video is from a report in April 2013:
[youtube UVZCX2cQSCQ nolink]

The shift in demographics can be explained by the decline in Caucasian birthrates along with many Caucasians leaving California for states in better financial condition.  The comparably higher birthrates of Hispanics and the fact that the majority of immigrants were born in Latin America (53%) can also be cited. 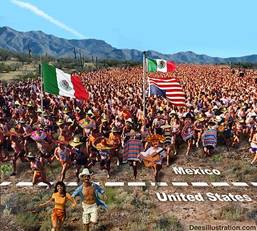 This article may be reposted elsewhere as long as it is done so in its entirety with full information about the author, credit to The Conservative Papers, and a link back to this article.

In Case You Missed It:  Biden promises that your tax dollars will be used by HHS to transport women across state lines for baby killing... "abortion Uber"
Posted in Freedoms and tagged California, Financial, Freedom, Illegal Immigration, Immigration, Liberalism, White Minority.

Why Abbas Won’t Sign Peace Agreement with Israel: His Life is in Danger if He Does

Mahmoud Abbas, the "illegal" chairman of the Palestinian Authority (PA), faces very imminent threats to his life, according to Middle East expert Prof....