Former tax official Lois Lerner’s confrontation with Congress over a potential contempt citation may get emphatically more dramatic, depending on how far back into congressional history House Republicans want to reach.

Deep in the recesses of congressional power — and in precedent stretching back to the 18th century — is the ability to pursue “inherent contempt” against individuals, including the right to imprison a person in the Capitol to compel compliance with lawmakers’ authority.

Congress hasn’t exercised inherent contempt power since 1935 and there’s no suggestion that lawmakers are actively considering the option in Lerner’s case.

But House attorneys, and lawyers for the former Internal Revenue Service official, are looking at the potential legal paths as House leaders consider first whether to take a contempt citation to the floor and, if it passes, whether the Justice Department will pursue prosecution.

The House Committee on Oversight and Government Reform voted on party lines to recommend the full House hold Lerner in contempt and refer her to the Justice Department for refusing to testify before the committee on allegations of political targeting at the IRS of conservative political groups seeking tax-exempt status. The GOP members said Lerner, who resigned from the IRS last year under fire for her role as the head of the office at the heart of the controversy, waived her Fifth Amendment privilege by delivering an opening statement declaring her innocence before the panel last year.

Her attorney, Bill Taylor of Zuckerman Spaeder, on Monday wrote to House Speaker John A. Boehner of Ohio and Majority Leader Eric Cantor of Virginia asking that Lerner have an “opportunity to present to the House” the reasons why it shouldn’t hold her in contempt.

Cantor suggested this week that a vote on whether to recommend a contempt prosecution against Lerner would likely come in May.

It’s not clear whether the Justice Department would pursue a prosecution, raising the question of what House Republicans will do if the contempt charge dies at the department. The inherent contempt authority leaves open the possibility that Congress can pursue the matter itself. 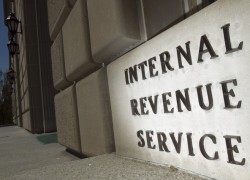 Congress’ authority to independently try and detain an individual has twice been upheld in the Supreme Court — in 1821 and 1927 — and there’s a colorful history of hauling delinquents before the House chamber.

The House first pursued inherent contempt proceedings in 1795 against two men accused of offering bribes to members. Congress would initiate 13 more inherent contempt cases over the course of the next six decades. In fact, the criminal contempt statute — the one facing Lerner — was devised as an alternative in 1857 because trying witnesses at the bar of the House chamber was taking too much time away from legislative duties.

The people rounded up by the sergeant-at-arms ranged from would-be bribers to an attorney general’s brother who was imprisoned in 1927 for refusing to comply with a subpoena in a Senate investigation of the lack of prosecution of allegations of antitrust violations. The offending witness is supposed to be locked up in the Capitol, but Congress also has turned them over to the city jail.

“The Senate has more rules” guiding the protection and release of information in an investigation, Shepherd said. “On the House side, it’s the wild, wild West.”

Either the House or Senate can invoke inherent contempt without a concurring vote in the other chamber.

Because of the doctrine of the separation of powers, some common-law rules of judicial court do not apply to the legislative branch. Attorney-client privilege, for example, is subject to the discretion of the investigating committee. Committees often respect the principle in practice, but it’s not guaranteed, according to Shepherd.

In inherent contempt cases, even a witness’s request for judicial review through a writ of habeas corpus historically has not gone far, and the review “may be relatively limited, compared to the plenary review accorded by the courts in cases of conviction under the criminal contempt statute,” according to a report on contempt procedure by the Congressional Research Service.

In 1934, for example, the Supreme Court denied a writ of habeas corpus to a petitioner in the custody of the Senate sergeant-at-arms in a case involving the destruction of documents requested by a Senate subpoena.

Yet in some ways, despite the trauma of being publicly tried on the House floor, inherent contempt is more lenient than the criminal contempt statute. Inherent contempt can be coercive — once the terms of a subpoena are met, the witness generally is released. But criminal contempt is punitive: The witness “generally will not be able to purge himself by testifying or supplying subpoenaed documents after he has been voted in contempt by the committee and the House,” the CRS report notes.

Because the criminal sanction is so final, the witness “lacks an incentive for cooperating” once the vote has taken place, according to CRS. So if information is the goal, inherent contempt, however dramatic, may actually work better.

Of course, that’s assuming the Justice Department actually follows through on a criminal contempt referral.

Even though the Justice Department has the “duty” to convene a grand jury in the event of a contempt citation under the criminal statute, courts have given prosecutors wide discretion on the issue.

Taylor, Lerner’s lawyer, did not respond to a request for comment on the possibility of an inherent contempt vote. Taylor has repeatedly dismissed the contempt proceedings as a partisan exercise.

And Oversight Chairman Darrell Issa, R-Calif., has developed a reputation as a passionate partisan critic of the Obama administration, and he and Attorney General Eric H. Holder Jr. have made little effort to disguise their animosity for one another in congressional hearings.

Just last week, Issa sent a letter to Holder alleging potential “harassment by the Justice Department,” in collusion with the IRS, “of groups engaged in otherwise lawful activity.” According to the letter, emails between Lerner and a Justice Department official prove the department “played a role in a government-wide effort to target political speech.”

In Case You Missed It:  Norway reclassifies Covid-19: No more dangerous than ordinary flu
Posted in Freedoms and tagged IRS, Obama, White House.