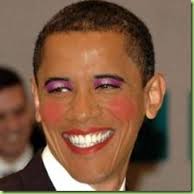 In order to put into perspective the political pathology that is our current President of the United States, it is perhaps instructive to contrast how the previous Democratic Chief-of- State might have approached the current governmental impasse.

While Bill Clinton was not above playing executive hardball; nevertheless, I am convinced that he would eventually have triangulated a satisfactory political compromise, as was his wont, between America’s twin ideologically warring camps in this most divisive of issues. In contradistinction, Obama: forever the Hyper-Left’s quixotic “True Believer,” has thoroughly squandered his precious Days in the Sun because he despised the birthright he was unworthy of — having lacked the political chromosome of compromise. The current drama unfolding is surely the result of his stunning hubris and thin-skinned temperament that intrinsically alienates him from the prudent statesman’s self-reflective art of course correction. As such, we – the citizens of America, are the sorrowful beneficiaries of this lamentable character defect.

The very nature of politics, the architectonic science that rules all others, requires a masquerade of sorts, which is why actors and politicos seamlessly migrate to and fro between these respective spheres. Be that as it may, Bill Clinton – despite his tragic weakness for the fairer sex and cavalier reputation with the truth, will forever be hailed the consummate politico, while the diva Obama will retire into contraction and notoriety: having laid waste to the enigmatic House of Liberalism – having burnt and scattered that which he had not built.

Verily, it takes a rare type of being to embrace and command the politician’s life. Aristotle would say it requires the ruling virtue of magnanimity—-a great-souled beneficent prudence that nevertheless occupies a degree of vertical distance between ruler and ruled. That being said, it is painfully apparent that Obama possesses none of the magnanimity while he doubles down on the dimension of distance – which is in effect, the very wellspring of his audacity.

In its traditional usage, the term “diva” has stood as a mark of preeminence describing a female performer of towering virtuosity, generally in the performing arts. The great operatic soprano, Maria Callas, would seem to have been the archetype for such a form. But in our culture’s more common vernacular, the appellations of both diva and prima donna have acquired negative connotations. Indeed, the Urban Dictionary: that crudely fashioned looking glass of our society’s descent into vulgarity, defines diva as

a bitchy woman that must have her way exactly, or no way at all. often rude and belittles people, believes that everyone is beneath her and thinks that she is so much more loved than what she really is. Selfish, spoiled, and overly dramatic.

With all apologies to Merriam-Webster, no high brow definition could ever serve to describe more succinctly these qualities of personality that embody Barack Hussein Obama. Unduly effeminate in his metro-sexualized comportment, Obama’s entire adult life has been corrupted by an echo chamber of fawning subservience. But like all accomplished and would-be autocrats, he has fallen into the same fatal error: he has taken to believe the Messianic shtick that has been cobbled together by his Handlers.  All self-ordained prophets are loathe to deviate even a jot or a tittle from their own shining historical path, and this deadly flight of hubris renders them ripe for terminal calamity.  It is the diva in Barack Obama that rejects accommodating his enemies, because his political world is a zero-sum affair and any concessions granted to infidels are viewed as anathema to his hyper-egalitarian base: romantic spirits who thirst for perpetual peace and plenty while enjoying Starbucks in their Birkenstocks.

Moreover, when your audacity ensures an absolute fidelity to the cause of Socialist rectitude, one need not extend the olive branch of dignity to those in opposition to your slash and burn maneuvers throughout the culture-at-large.  Obama emotionally marginalizes his adversaries: going so far as blackening their names for political points at press conferences and memorial service. Unquestionably, such cocksure cynicism emboldens him to throw moderation to the wind when employing scorched-earth tactics to gain the advantage. Obama is politically obligated and morally self-affirmed in the application of torment to innocents in order to make clear his point of “who’s the boss.” And so, in the enlightened second decade of the United States’ 21st century, we have arrayed before us Progressivism’s punitive legacy to America – the Diva Extortionist par excellence!

Mr. Obama, having been given the Nobel Prize early on for literally no human achievement, has underperformed in relation to his worshipers’ stratospheric expectations of political transformation. In reality, he has been in far over his head from the beginning and has only prevailed upon the dull American Middle by masking ideological artifice with his strong suit of carefully scripted rhetoric. But five years under relentless scrutiny has worn away the grease paint, revealing to the world’s stage his diminutive and hollow center. Congenitally unable to build a consensus or approach a middle way, he has acquired an Epicurean’s taste for the expedient and the tyrannical: amassing both the prerogatives of legislator and executive, with the help of a willing media, into a sinister blend of the Imperial.

Nothing evidences this more fully than his loathing of our Constitution’s Separation of Powers and system of Checks and Balances. And it is clear that, like all Progressives who were weaned upon the teat of Wilsonianism, Obama grows frustrated at the glacial flow of a system designed to thwart the demagogue: whose ruling passion is to transform a regime into an arbitrary image of his own choosing.  His petulant manner betrays an utter disdain for American Constitutionalism that was cultivated by earlier Marxians – who believed that the arm of governmental power should be decidedly swift and dynamic.  Indeed, Obama seems psychologically predisposed to damn every restraint that serves to thwart his agenda of centralizing and metastasizing the State. Grown isolated and imperious on his throne of presumption, he is neither humbled nor moved by the disorder and dislocation he is affecting through his stratagems.  In truth, he is exhilarated by the epic struggle and will not rest until he has placed his enemies as footstools under his feet.

On the contrary, how antithetical is our Founders’ understanding of not only government, but of life itself.  While Progressives’ hold that not only man’s intellect but his very nature is utterly malleable in the hands of a skilled Guardian class, our Founding Fathers were thoroughly acquainted with the passionate vicissitudes of arbitrary rule, and knew far better than to trust abstract entreaties that are melded in the forge of power and altruism.  One needn’t have gone far to discover why – since any wise man in tune with  his own heart knows what evils can be justified – given enough contingencies.  The Progressive is by temperament immune to such humility, and the lure of good intentions alone are a sufficient enough spur for a Herculean government to then pounce. Who can now deny that Barack Obama is the proverbial “red-diaper baby” who has waxed strong in suckling longingly at the cult of the liberal political daydream, and his monstrous signature policy showpiece will tell us everything we ever needed to know about what this political diva has in store for us?

Let it be said without equivocation: the scourge of Obamacare will not be surrendered without a pitched battle to the very barricades of the Progressive’s radicalized articles of faith. Indeed, its entire philosophical essence is the sine qua non of liberalism’s virtue of equality accelerated to a fevered pitch. For the True Believer, it would be better that the entire architecture of American medicine be pulled down into ruins than for our own foreign born Demi-God of Shared Misery to be denied his rancid pound of flesh.

This bears repeating: Obamacare is symbolic of the unmoored liberal spirit of ill-considered covetousness amplified to the nth degree – for in the smoldering Lilliputian minds of men who worship social leveling and bloodless similitude above all things, it is far better that men share a bitter cup of bile in common than it is to entertain the possibility that humans could be fruitful and content in their unequal liberties.  May every base act of their sullen political gimmickry be shattered into pieces upon the granite and marble of our great parks and memorials – tangible proof to all the inhabitants of the earth that the strength of our republic resides in a long prescriptive history of liberty buttressed by our Founders’ genius of judicious wisdom and time-honored law.  Such a treasured legacy belongs to the procession of our generations – and is not the province of a single petulant diva stomping his foot in the throes of his own royal tantrum.

Glenn Fairman writes from Highland, Ca. He can be corresponded with at [email protected].

In Case You Missed It:  Dr. Scott Lively talks Afghanistan and why Americans should be worried in his new show on Brighteon.TV
Posted in Freedoms.

Interesting snippets from Ronald Kessler’s book about our presidents

Interesting snippets from Ronald Kessler’s book about our presidents. “In The President’s Secret Service”. JOHN & JACQUELINE KENNEDY A philanderer...