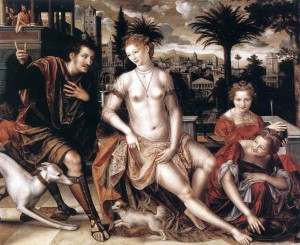 It is written that the totality of the Law and the Prophets is contained within the following: to love the Lord God with an unwavering zeal and to hold the love of one’s fellow men in similar, albeit lesser esteem. This hierarchy is legislated for two distinct reasons. First, it serves as a schoolmaster — instructing what should be the Divine order of our heart’s allegiance. And more fully, it is a reminder of how far we have wandered from our created perfection. In surviving as a race of nomads in a state of open rebellion with Life Incarnate, anything less than the above is reckoned as sin. Having come to terms with our primary obligation to God and man, the sum of the Decalogue exists merely as amplifying corollaries — adding substance for the moral imagination of a stiff-necked humanity.

God’s tenth and final command is to a moral consciousness that seems inexorably bound to a world of competing beings and their possessions — since property quickly becomes an extension of our personalities. With it, we are admonished to flee the snares that accompany the lusts of the flesh: those barbed delicacies that gain admittance through the eye’s window. It is perhaps natural for the soul deficient in its communion with God to acquire a taste for avarice: the most futile of endeavors. But it is quite another thing to affix one’s desire to the objects possessed by another. No earthly flesh is entirely inoculated against this condition and its smoldering effects can burst into flame at a moment’s notice with the subtlest of provocations.

The Tenth Commandment, therefore, was not legislated merely to restrain cupidity, but covetousness. Both vices arise from a motivation to add to oneself; but the latter, in its fully realized form, grounds itself in something more sinister than base acquisition. The temptation for preeminence – to be more esteemed in the City than one’s peers — arises from the polymorphous character of human pride and kindles the quarrel between man and his brethren. If one looks closely enough with fresh eyes, it becomes apparent that every socio-economic system on the earth is held firmly in its grip, and like fish that swim in a common pool, we are quite unaware of the medium that saturates us. Indeed, both Capitalism and the manifold species of Collectivism are rooted in coveting – whether it is manifested in “keeping up with the Joneses” or driving the altruistic egalitarianism of idealists hell bound to administer their earthly utopias.

Free Enterprise may be looked upon as an aggregate boon to the uplift of humanity’s material estate, but in the subterranean regions of the beast one finds Conspicuous Consumption: the desire to possess and display the finest and to be the object of another’s admiration and desire. At this end of the spectrum, the itch for human magnificence or magnanimity becomes paramount, and men rank themselves within the pecking order of homo economicus. Here, one’s station and accoutrements are to be coveted – even as one covets what is held by others further up on the treadmill. Such a worldview is founded in the spirit of spiritual dissatisfaction, as men assure themselves: “If only I had this woman or this bauble or gadget, I would be complete —at least for a time.” How many of us have dreamed over and finally acquired our “precious,” only to have soon tossed it in a drawer while setting our caps for the next in a long train of dubious treasures?

While Capitalism might stoke the fires of inconsolable acquisition, those Social Engineers that bloom like weeds from Modernity’s lust for equality are less forthcoming in their self-appraisal. While a covetous man might have acknowledged and come to terms with his wretchedness, the Collectivist is so immersed in his project of evangelizing universal peace and plenty that he is blind to the truth that his entire enterprise is one of redeeming covetousness into a public virtue. Having inverted the economic poles so that justice is now defined as the commandeering and dissemination of goods that had once been the fruit of another’s labor, the Socialist’s artificial moral universe has sanitized covetousness. Taken to this worldview’s logical extreme, it is a moral defect to want or have more than another. And to insure that such a materialist sin is tamed and goodness is rewarded, the state becomes the vigilant arbiter of wealth for those who elevate envy to a quasi-religious sacrament. More fully, the state relieves its citizens from the uncomfortable burden of witnessing the fruits of their own material covetousness in action.

In the second book of the Prophet Samuel, we are told that the Hebrew Warrior King David, beloved by Jehovah for his noble heart, spied the beautiful wife of Uriah on her rooftop and burned for her. Upon consummating his adultery and compounding his iniquity with murder, David and his kingdom bore the consequences that arose from his covetousness. While secular human history tends to gloss over moral indiscretions, there is a reason to include this uncomely episode in the annals of God. Despite the vigilance that serious men exercise over their souls, covetousness is father to a multitude of sins and it sprouts from focusing our attention on ourselves and our appetites. Ingratitude, and the expectation that we have been denied our portion of happiness by the lax Hand of Providence, can lead us to commit the most reprehensible of deeds with a view to reclaiming the justice of our ill-conceived desires. And like all those that flout the natural laws written on our hearts, we discover too late that bitterness, tragedy, and ruin are often the final wages of forbidden pursuits.

Happy the man who can find satisfaction in his allotted earthly portion and does not require that hard won wisdom earned through tears and travail. The unhappiest of wretches, whether they are adorned in silk or sackcloth, are slaves to the hunger for a life that will never be their own; and even if they could somehow manage to obtain the golden ring, it would never be enough — it could never be enough to quench that hellish thirst for more. How fortunate that in forsaking what is forbidden, we then begin to yearn for the gifts that are legitimately ours. And in doing so, we are fully primed for an elusive but even greater happiness in a place we should never have suspected.

Glenn Fairman writes from Highland, Ca. He welcomes your correspondence at [email protected] He can be followed at www.stubbornthings.org and on Twitter.

In Case You Missed It:  Horrified patient says doctors left a breathing tube in his body for 30 years
Posted in Freedoms.

Obamacare Can’t Handle the Truth: Data Not Adding Up for Enrollees

Obamacare prompts one huge headache right off the bat for Sylvia Mathews Burwell, the newly confirmed secretary of the Department of Health...