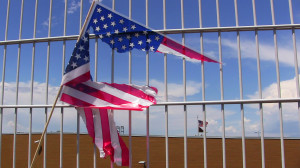 MURRIETA, California – GMN – After a long and hard fought day in the baking California sun, the Department of Homeland Security and US Border Patrol were forced to bend to the will of the residents of Murrieta, California, as federal bureaucrats made the decision to redirect immigrant bus convoys at 10pm PST – to a facility at the San Ysidro district of the City of San Diego.

The atmosphere of tension between local residents and DHS/US Border patrol at the federal processing compound in Murrieta had become further inflamed yesterday morning when hundreds of college students in conjunction with radical pro-immigration activists from La Raza, the Communist Revolution Party as well as other Occupy-linked groups, were bused in from Los Angeles, purposefully positioning themselves opposite peaceful local Murrieta residents at the front gates of the facility. The highly confrontational leftist activists had been seen desecrating a number of small flags that local residents had pinned to the DHS facility fence, while also burning American flags on the very holiday that commemorates the country’s independence from Great Britain’s rule. The timing of this dramatic effect was not lost on those who are truly aware of the many challenges facing America today, as lefty-agitators mutilated a symbol that represents the freedom in which the United States was founded on 238 years ago.

The move to insert outside provocateurs into the mix backfired however, after radical leftists attacked a 70-year-old local female Patriot protester.

When a local Murrieta police officer intervened in the altercation, left-wing youths then set upon and attacked the officer which ended in ten young radicals being subsued in handcuffs and arrested. GMN reporters rolled up to the scene as the arrests were being made. Watch the arrests here:

After local police subdued the left-wing activists and removed them from the scene, the protest area at Fig Street remained peaceful and orderly throughout the remaining afternoon and evening.

70-year-old resident Kathleen Rodriqeuez was unharmed by the incident. She explains, “They didn’t like my hat (American flag). The young people came and they were trying to provoke a reaction from me because they thought I was an easy target.”

Jeremy Oliver, a resident of Temecula, California–a town that neighbors Murrieta–Said Texas that local police officers warned the protesters that “it’s going to get ugly.”

Oliver said, “The feds are pissed that they haven’t been able to use this facility. Officers out there warned people that federal agents will be in Murrieta on Monday–they are going to get the next bus through no matter what. Riot gear and shields will be used to push the crowd back.”

John Henry, a Murrieta resident since 1991, was told the same thing by local officers.

“We’re being told that federal Marshals or ICE will be here in the next few days and that they are bringing riot gear,” Henry said. “They’re apparently going to be blocking off the street with concrete blockades so that no vehicles can get through. The River County Sheriff’s Department showed up last night and brought a huge watch tower that shoots up into the air 35 feet.”

To show your support for protests against Obama tyranny and disregard law, the Murrieta Border patrol processing centers address is:

Looks like this could be another Bundy Ranch scenario in the making in Murrieta CA, as people from across the nation are on their way to Murrieta in support of the residents of Murrieta.  Nearest airports for those flying are San Diego and Ontario Airports  (Airport codes: (SAN) and  (ONT)

“Meet the Press” host David Gregory had a simple question for Department of Homeland Secretary Jeh Johnson: Do the children...