By Daniel Greenfield:  I have been searching for moderate Islam since September 11 and just like a lost sock in the dryer, it was in the last place I expected it to be. 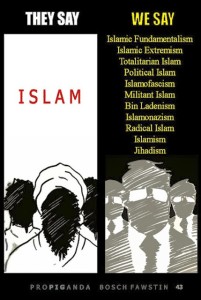 There is no moderate Islam in the mosques or in Mecca. You won’t find it in the Koran or the Hadiths. If you want to find moderate Islam, browse the newspaper editorials after a terrorist attack or take a course on Islamic religion taught by a Unitarian Sociologist wearing fake native jewelry.

You can’t find a moderate Islam in Saudi Arabia or Iran, but you can find it in countless network news specials, articles and books about the two homelands of their respective brands of Islam.

You won’t find the fabled land of moderate Muslims in the east. You won’t even find it in the west. Like all myths it exists in the imagination of those who tell the stories. You won’t find a moderate Islam in the Koran, but you will find it in countless Western books about Islam.

The new multicultural theology of the West is moderate Islam. Moderate Islam is the perfect religion for a secular age since it isn’t a religion at all.

Take Islam, turn it inside out and you have moderate Islam. Take a Muslim who hasn’t been inside a mosque in a year, who can name the entire starting lineup of the San Diego Chargers, but can’t name Mohammed’s companions and you have a moderate Muslim. Or more accurately, a secular Muslim.

Even if they have to make it up.

Without a moderate Islam the Socialist projects of Europe which depend on heavy immigration collapse. America’s War on Terror becomes the endless inescapable slog that the rise of ISIS has once again revealed it to be. Multiculturalism, post-nationalism and Third World Guiltism all implode.

Without moderate Muslims, nationalism returns, borders close and the right wins. That is what they fear.

If there is no moderate Islam, no moderate Mohammed, no moderate Allah, then the Socialist Kingdom of Heaven on Earth has to go in the rubbish bin. The grand coalitions in which LGBT activists and Islamists scream at Jews over Gaza aren’t the future; they’re the Weimar Republic on wheels.

Flash back to Obama in his tan suit wearily saying that he has no strategy for ISIS. The original plan was to capture Osama alive, give him a civilian trial, cut a deal with the moderate Taliban and announce the end of the War on Terror before the midterm elections.

So much for that.

Moderate Islam is a difficult faith. To believe in it you have to disregard over a thousand years of recorded history, theology, demographics and just about everything that predates 1965. You have to ignore the bearded men chopping off heads because they don’t represent the majority of Muslims.

Neither does Mohammed, who did his own fair share of headchopping.

The real Islam is a topic that non-Muslims of no faith who hold sacred only the platitudes of a post-everything society are eager to lecture on without knowing anything about it.

Their Islam is not the religion of Mohammed, the Koran, the Hadiths, the Caliphs or its practitioners in such places as Saudi Arabia, Pakistan, Iran, Iraq or Indonesia. Their Islam is a religion that does not exist, but that they fervently believe must exist because without it their way of life is as doomed as the dodo.

They aren’t Muslims. They have no faith in Allah or the Koran. Instead they have faith in the goodness of an Islam that exists without resort to scriptures, theology or deity. This may seem strange to actual believers, but after all their own poor tattered scraps of Christianity or Judaism don’t bother paying too much attention to deities or scriptures except when it comes to cherry-picking quotes about tolerance.

Is it any wonder that they treat Islam the same way?

The true moderate Muslims are secular liberals of loosely Christian and Jewish persuasion who have invented and believe in a moderate Islam that doesn’t exist outside of their own heads. This secular Islam, which values all life, is dedicated to social justice and universal tolerance, is a counterpart of their own bastardized religions. And they are too afraid to wake up and realize that it doesn’t exist.

When American and European leaders insist that Islam has nothing to do with the latest Islamic atrocity, they are not referencing a religion practiced by Muslims, but an imaginary religion that they imagine Muslims must practice because the alternative is the end of everything that they believe in.

Their moderate Islam is light on the details, beyond standing for social justice, fighting Global Warming and supporting gay rights, because it is really multiculturalism wearing a fake beard. When a Western leader claims that the latest batch of Islamic terrorists don’t speak for Islam, he isn’t defending Muslims, he’s defending multiculturalism. He assumes that Muslims believe in multiculturalism because he does.

Dissuading a believer in moderate Muslims from his invented faith by citing the long trail of corpses or the hateful Hadiths that call for mass murder is futile because these are not the roots of his religion. He doesn’t know what a Hadith is nor does he care. As a social justice man in good standing, he attributes the violent track record of Islam to European colonialism and oppression.

He has never read the Koran. He has read a thousand articles about how Muslims are oppressed at the airport, in Gaza, in Burma and in Bugs Bunny cartoons. They are his new noble savages and he will not hear a word against them. Having colonized their identities in his imagination (despite the marked up copy of Edward Said’s Orientalism that he keeps by his bedside) he treats them as reflections of his ego.

When you say that moderate Muslims don’t exist, you are calling him a bad person. When you challenge Islam, you are attacking multiculturalism and he will call you a racist, regardless of the fact that Islam is as much of a race as Communism, Nazism or the Mickey Mouse Fan Club were races.

The moderate Muslim is an invention of the liberal academic, the secular theologian, the vapid politician and his shrill idiot cousin, the political activist. Like the money in the budgets that underpin their plans and the scientific evidence for Global Warming, he does not exist.

The degraded lefty descendants of Christians and Jews wait for a moderate Muslim messiah who will reconcile the impossibilities of their multicultural society by healing the conflicts between Islam and the West. Until then they find him, it necessary to believe, not in a divinity, but in the moderate Muslim.

Daniel Greenfield, is a New York writer focusing on radical Islam. He is completing a book on the international challenges America faces in the 21st century and can be found blogging on Sultan Knish.com

In Case You Missed It:  Proof that the Taliban takeover was not Biden's incompetence But TREASON!
Posted in Terrorism and tagged Islam, Jihad, Muslims, Terrorism.

An Internet video purports to show the beheading of U.S. journalist Steven Sotloff by the Islamic State group.    Sotloff, who...