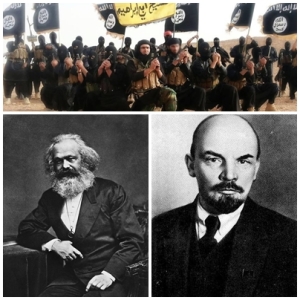 “The criticism of religion is the prerequisite of all critique.” Karl Marx

To take sides with Islamists in the name of democracy, to support the existence of Islamic sharia is to maintain its objectives to organize, strengthen and take power which, in case it succeeds, due to its intrinsic structure, due to the theology of Islam, will take all of your freedom from you, hang, imprison and exile. Just like what happened after the “Islamic Revolution”.

Islam in itself is the enemy of democracy and freedom. You can see the concrete examples in countless incidents happening everyday in Iraq, Syria, Afghanistan, Iran, Saudi Arabia, Somali and Nigeria. Never be deceived by the ignorant persons who tell you that “It’s not what Islam really is”, because Islam is precisely that. The Islamic law sees stone to death, homophobia, cutting hand as punishment, pedophilia, women who have been taken prisoners as war booty being sex slaves, woman being a second rate person who solely exists to serve her husband as a commodity, necrophilia being legitimized based on Muhammad’s “lying next to one of his wives” which implies that he raped the corpse, defending the right to have sexual intercourse within 6 hours from the moment of death based on the acts of Muhammad considered as “tradition”, to kill the ones who it labels as “heretic”, rape their women, extort their property and land as it’s right and duty; so anyway you cut it, Islam is a crime against humanity. And crime has nothing to do with freedom.

Islam, which reserves in its heart the potential for massacre, rape and the instigation of extort, must be prohibited, and its propagandists should be put on trial within the context of contradicting human rights and crimes committed against humanity.

Nevertheless, there are socialists unfortunately taking sides with the Islamists in the name of democracy. Even though the position of the “Libertarian Left” is a political structure that i agree with most of the time, which seizes upon the attitude of defending the struggle of sexual and ethnical minorities in conjunction with class struggle as a “must be”, I tend to stay away from it to avoid the negligence of those who support the Islamists in the name of democracy.

However, the analysis of both Lenin and Marx are erroneous because of the lack of proper assessment. Because; their predicating solely on Christianity in their analysis on religion, in order to develop an attitude against while defending the internationalist class struggle, is a great deficiency.

In the Communist Manifesto, they adopt a particular attitude towards religion in line with their analysis solely based on the “church”.

Although Marx’s phrase “religion is the opiate of the masses” is popular (opium was used as a medicine to obtund and cure the pain caused by diseases) the part at the beginning of the same sentence is commonly skipped. When Marx was saying, “Religion is the sigh of the oppressed creature, the heart of a heartless world, and the soul of soulless conditions.”, he was interpreting religion only through Christian theology which commanded “If someone slaps you on one cheek, offer the other cheek also” and he was going into the effort of showing ”empathy” with the religion which he saw as a medicine that eased the pain of the uneducated masses, which had inhuman rules commanding women to be killed by being stoned to death, defending pedophilia-necrophilia, seeing it as a right to kill the ones who are not Muslim; because he knew nothing about the theological essence of Islam, he never considered it necessary to make any research on the subject, while calling the proletariat in every country to be organized. Unfortunately, Marx who said ”The criticism of religion is the prerequisite of all critique.” haven’t criticized “all religion” and thereby adopted a deficient and wrong attitude towards religion. Without any doubt, those who follow Marx blindly continue to repeat the same mistakes he did.

To get back to the issue of “Libertarian Left”… To support Islam in the name of democracy is no different from being “the stupid steer which licks the knife of the butcher”, as you go on licking, the knife would cut your throat sooner or later…

Having careened down the rabbit hole into the Bizarro world of America 2014, wherein half the population has consumed their...