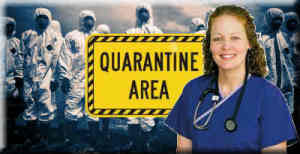 Additionally the astronauts were scrubbed down with a sodium hypochlorite solution and the Command Module was wiped with Betadine to remove any lunar dust that might be present. The raft containing decontamination materials was intentionally sunk. Upon landing on the USS Hornet with the three astronauts on board, the helicopter was lowered into hangar bay #2 where the astronauts walked 30 feet to the Mobile Quarantine Facility (MQF) where they would begin 21 days of quarantine. This standard practice would continue for two more Apollo missions, Apollo 12 and Apollo 14, before the Moon was proven to be barren of life and the quarantine process dropped.

The Ebola virus is a virulent and highly contagious disease that has gone though Western Africa like a hot knife through butter. Approximately 4,000 people have died to date. Thomas Eric Duncan, a Liberian National, lied on his pre-departure paperwork knowing he had been exposed to the virus and knew he probably had it based on what had happened to his friend and others. Yet he came here and exposed many others with 2 nurses contracting the virus and having to be quarantined and treated.  Had he not been selfish and not lied on his departure questionnaire in his home country, he would have been identified and not allowed to leave, and two Dallas nurses would not have been exposed and contracted the disease. Dr. Craig Spencer, the New York City doctor who became infected with the Ebola virus last week, initially lied to health officials about his movements around the city after he returned from treating victims of the disease in West Africa, according to a published report.

The New York Post citing law enforcement sources that he initially told investigators he had self-quarantined himself in his Harlem apartment. According to the paper, Spencer’s story fell apart after investigators checked his credit-card statement and information from his Metro-card. Spencer, 33, returned to New York from Guinea on Oct. 17 and was rushed to Bellevue Hospital Center on the morning of Oct. 23 with fatigue, nausea, and a 100-degree fever. In the intervening period, he traveled on three of the city’s most heavily-trafficked subway lines. He visited the High Line park and a Greenwich Village restaurant in lower Manhattan. He then went for a three-mile run before going bowling in Brooklyn the day before he was hospitalized. This is a perfect indicator the screening at airports are not an effective measure for identifying the disease. You don’t have to exhibit symptoms to determine if one is infected. Had Dr. Spencer been immediately quarantined upon arrival, a multitude of New Yorkers would not have been exposed and possibly contract the disease.

And now there is Nurse Kaci Hickox who believes she is above the virus and will not allow herself to be quarantined in spite of the existing cases of exposure. She is going as far as attaining a lawyer to represent her case. It was noted in the photo of her meeting with her attorney that he was outside the tent discussing legal matters with her. One would think if he was so interested in the case for its merits he would have demanded to be allowed inside as to protect lawyer client confidentiality with her since there would be no cause for alarm on possible exposure. He obviously had more common sense than she does to keep his distance and follow quarantine procedures. Why should the average American put themselves at risk of exposure because this nurse intends on not being quarantined. This is a common-sense approach to containing any exposure to the virus. Yet she wants to walk among everyone not knowing if she has contracted the disease. In 21 days of quarantine everyone would know if she falls into the 95% of people who would exhibit the symptoms if infected. She wants her 15 minutes of fame for this. If she gets sick she’ll have more fame than ever and her and her family will not enjoy the impacts of this one selfish act on her part.

To state the seriousness of this disease, Maine health officials on Tuesday said they are prepared to go to court to force Nurse Kaci Hickox to comply with the state’s “voluntary” 21-day quarantine period for health care workers who have treated Ebola patients, as the nurse vows to defy the state. On Wednesday, Hickox told NBC’s “Today” she doesn’t “plan on sticking to the guidelines” and is “appalled” by the home quarantine policies “forced” on her. “I truly believe this policy is not scientifically or constitutionally just, and so I’m not going to sit around and be bullied by politicians and be forced to stay in my home when I am not a risk to the American public,” she said, saying she’s in “perfectly good health.”

In perfect health? Dr. Spencer believed he was in perfect health until 6 days later when his symptoms began.  This nurse wasn’t in class on the day Epidemiology was discussed and how the first step for dealing with a pandemic is to isolate and contain the exposure. Hickox, who volunteered in Africa with Doctors Without Borders, was the first person forced into New Jersey’s mandatory quarantine for people arriving at Newark Liberty International Airport from three West African countries. Hickox, who spent the weekend in a quarantine tent, said she never had Ebola symptoms and tested negative in a preliminary evaluation. New Jersey Republican Gov. Chris Christie and New York Democratic Gov. Andrew Cuomo were sharply criticized for ordering mandatory quarantines.

In Maine, quarantine comes into play only when people have contact with Ebola patients; others who’ve been to the three countries will be monitored, officials said. If the average American believes these are isolated cases and they won’t be affected, think again. A memo obtained by Fox News indicates that the Obama administration has been considering allowing non-American Ebola patients into the U.S. for treatment, though a State Department official on Tuesday denied any such plans. The document was obtained by Fox News from a Capitol Hill source, who said it is a memo prepared by the State Department. The top of the document is marked “sensitive but unclassified – pre decisional.”

The purpose of the memo states; “Come to an agreed State Department position on the extent to which non-U.S. citizens will be admitted to the United States for treatment of Ebola Virus Disease.”

The document goes on to discuss and advocate for devising such a plan. The memo recommends “State and DHS devise a system for expeditious parole of Ebola-infected non-citizens into the United States as long as they are otherwise eligible for medical evacuation from the Ebola affected countries and for entry into the United States.”  This attitude and ineptitude on the administration’s part clearly puts the U.S. at risk and should be viewed as clear and present danger advocated by this idiotic administration.

Anyone who is in direct contact with Ebola patients needs to be quarantined upon arrival. Our astronauts were aware of the risks landing on the moon and accepted the 21-day quarantine in the best interest of the country. For Ebola we know what the risks are and they exist. People have died from this virus, and to allow those exposed to freely and potentially expose others during the first 21 days is just irresponsible! The States are making this the standard protocol and the Federal Government should embrace it as the right thing to do for the American people. It would seem Dr. Spencer and Nurse Hickox took a pass on Ethics training in favor of their selfish motives.  If you want to be the heroes, be heroes and do the right thing for others and not just yourself.

Now the Military are to be quarantined because they aren’t volunteers, but civilian healthcare workers won’t be because they are volunteers. I didn’t know the virus has the intelligence to discern between a volunteer and a non-volunteer before infecting. Unbelievable.

In Case You Missed It:  CDC just warned that 15,000 Americans will die EACH WEEK by Christmas; but it's actually VACCINE DEATHS that are accelerating just as independent doctors told us all along
Posted in Freedoms and tagged Africa, Ebola, Health And Human Services, United Socialist States of America.

Elections: The National Council of La Raza is promoting no-identification voting states to its followers. Might that have something to...